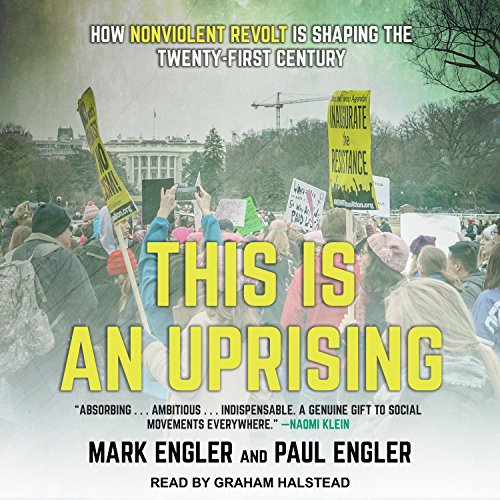 This Is an Uprising

By: Mark Engler,Paul Engler
Narrated by: Graham Halstead
Try for $0.00

Strategic nonviolent action has reasserted itself as a potent force in shaping public debate and forcing political change. Whether it is an explosive surge of protest calling for racial justice in the United States or a demand for democratic reform in Hong Kong or Mexico, when mass movements erupt onto our television screens, the media portrays them as being as spontaneous and unpredictable.

In This Is an Uprising, political analysts Mark and Paul Engler uncover the organization and well-planned strategies behind such outbursts of protest, examining core principles that have been used to spark and guide moments of transformative unrest.

This Is an Uprising traces the evolution of civil resistance, providing new insights into the contributions of early experimenters such as Mohandas Gandhi and Martin Luther King, Jr.; groundbreaking theorists such as Gene Sharp and Frances Fox Piven; and contemporary practitioners who have toppled repressive regimes. Drawing from discussions with activists now working to defend human rights, challenge corporate corruption, and combat climate change, the Englers show how people with few resources and little influence in conventional politics can nevertheless engineer momentous upheavals.

"A usefully organized, concise history of social movements that will appeal to newer generations of activists." ( Kirkus)

What listeners say about This Is an Uprising

A long read but SO MUCH useful activism content

I was struggling to finish this book (as a hardback) just due to its non-fiction historical nature so I switched to audible and was able to cruise on through. Drags on a bit at the end of the book but over all so much great content that I frequently refer to in my day to day activism. It's super useful stuff to know for anyone working on a cause that needs to spur public opinion!

I appreciate the breadth of this book, focusing on both US and international groups. Relevant.

Excellently researched history of NVDA and well-read account of the strategy & culture behind non-violent direct activism/uprisings. Thoroughly educational+beneficial reading. If you want to non-violently change the world, read this!

This is a great book, an academic approach to successful, non violent uprisings. Anyone interested in how a movement can succeed should read this book.