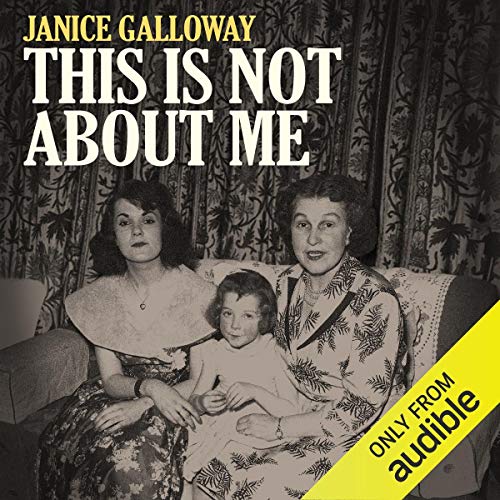 This Is Not About Me

From her earliest years with a boozy, accident-prone father and a reluctantly pragmatic mother, Janice Galloway grew up as a watcher – careful and vigilant. Then her parents’ marriage broke up and mother and daughter moved to an attic above a doctor’s surgery. When her big sister Cora returned home, with a steady stream of boyfriends, snappy dress sense and matching temper, evasion became a way of life.

This is a funny and telling book about the routine dependencies and confusions, hopes and triumphs of childhood; it is also a book about emergence, as, slowly, the beginnings of unsuspected rage pushed the silent girl towards her voice.

Janice Galloway is the author of five critically celebrated works of fiction and two memoirs. Her first novel, The Trick is it Keep Breathing, is now widely regarded as a Scottish contemporary classic, with a stage adaptation performed in Glasgow, Toronto and London; while her second book, Blood, was a New York Times Notable Book of the Year. In August 2012 All Made Up, the sequel to This is not About Me, won Scottish Book of the Year award at Edinburgh Festival.

“Sublime prose and fierce honesty set it apart - part of Galloway's skill in This is Not About Me is how she keeps a child's sense of bewilderment and secret understanding” ( Daily Telegraph)
“Blistering, terrifying, always moving” ( Independent on Sunday)
“Galloway provides sentences blazing with light, a gorgeous draft of terror” ( Observer)

What listeners say about This Is Not About Me

What made the experience of listening to This Is Not About Me the most enjoyable?

The tender brutality and supremely poetic imagery of this book stays with you long after you put it down.

Brilliant in every way. A memoir which leaves one in awe of how the author depicts her life and the people in it with such humbling talent. Read brilliantly too.