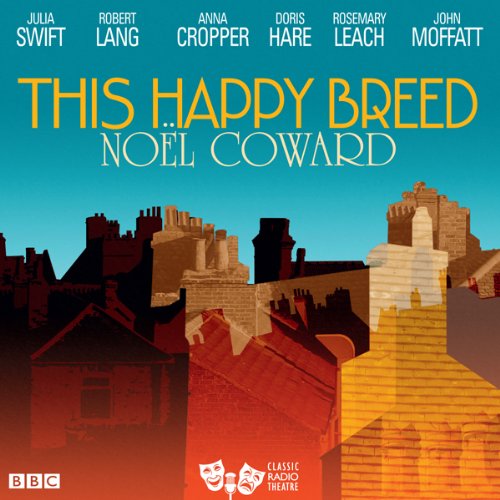 John Moffatt and Rosemary Leach star in this BBC Radio 4 production of Noël Coward’s patriotic play about the ups and downs of a working-class family between 1919 and 1939.

This Happy Breed opens in 1919, when the Gibbons family have just moved to their smart new home in the suburbs of South London. Against a background of social change and national upheaval spanning twenty years, the family celebrate their own triumphs and deal with their personal traumas.

Coward’s moving and humourous production, showing what life was like for a typical suburban family between the wars, was a huge hit and was adapted into a famous 1944 film starring John Mills and Celia Johnson. Among the distinguished cast in this 1989 BBC Radio 4 production are John Moffatt, Rosemary Leach, Anna Cropper and Doris Hare.

Loved every second of this performance and it's a credit to the brilliance of Noel Coward.

an first class feel good story from the master of an typical English family after the war and the start of another.

Takes you back to a time when everything seemed simpler. Wonderful family saga of times between the wars

A pleasure to listen to. One of Cowards Best works. Buy it you will not regret it.

Brought back happy memories of seeing this as a black and white film. Excellent. Highly recommend.