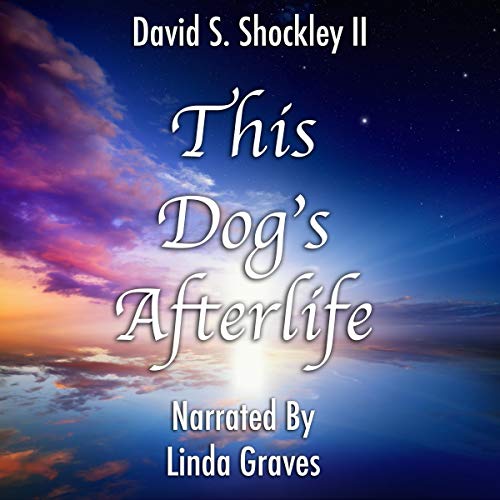 By: David Shockley
Narrated by: Linda Graves
Try for $0.00

Do you ever wonder what your dogs are thinking? How they feel? What they’re dreaming about as they run, whimper, bark, and growl in their sleep? Who or what they’re playing with when they romp around all by themselves? What they’re looking at when all you see is a blank wall or an empty doorway? Will we see them again after they’ve gone? Are they still here watching over us - helping, perhaps even snuggling with us like they used to? What if they wrote and sent you a story from the great beyond?

This Dog’s Afterlife answers those questions. Tucker, the canine narrator, takes the listener on an adventure starting from the most unlikely of places: the last day of his life. At that moment, he realizes that the end is really just a new beginning. Tucker encounters many new wonders and finds he has much to learn. Fortunately, he has help in the form of his father, Rocket, and a cast of canine characters who show him the ropes. Along the way, he learns that some souls don’t immediately move on to the afterlife, but instead, find themselves adrift. Those souls can be found and helped, but it’s a delicate and dangerous task. When he tries to rescue the lost soul of a young boy, Tucker realizes that even after death, sorrow is a very real, very tangible thing, and that there are still fears to overcome and hard choices to be made.

What listeners say about This Dog's Afterlife

What a lovely story. Listening to this story made me think of all my beloved pets that have long since left this world, and I'd like to imagine them having an afterlife as depicted in this book. Linda Graves read the story with such heart and compassion and each character was distinct and very enjoyable. She handles the heart of the story so well along with the wry humor that is sprinkled in here and there. She is very enjoyable to listen to as you go on this journey with Tucker. The writing has some beautiful descriptive passages that make you pause and rewind to hear them again, and the setting and characters are described so vividly that you can really picture it all as you listen along. This is a good story for all ages and would be great for a family road trip!

Enjoyable for all ages

We took our two grandchildren, ages 12 and 9, on a short road trip last week and decided to listen to this book as we drove. All four of us enjoyed it. The first reaction from my grandson was “they hinted that there would be a sequel and I certainly hope there is one!”. My granddaughter said “it was good. I liked it”. We talked about what they liked and one said he particularly liked all the different characters. “Each one had his own voice so I knew who was talking. They were interesting voices too.”. My husband said it was “imaginative” and “kept my interest”. I enjoyed the story but especially marvelled at the narrator’s ability to be consistent and distinct with the many voices portrayed. Yes, the story was certainly imaginative, but the narrator’s talent made it entertaining and enjoyable for all of us. I will seek out any book she narrates in the future.