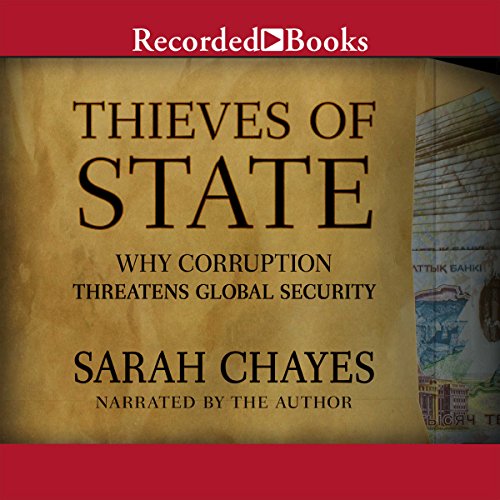 A former adviser to the Joint Chiefs of Staff explains how government's oldest problem is its greatest destabilizing force. Thieves of State argues that corruption is not just a nuisance; it is a major source of geopolitical turmoil. Since the late 1990s, corruption has grown such that some governments now resemble criminal gangs, provoking extreme reactions ranging from revolution to militant puritanical religion.

Through intensive firsthand reporting, Sarah Chayes explores the security implications of corruption throughout our world: Afghans returning to the Taliban, Egyptians overthrowing the Mubarak government - but also redesigning Al Qaeda - and Nigerians embracing both evangelical Christianity and Islamist terrorist groups like Boko Haram. The pattern, moreover, pervades history. Canonical political thinkers such as John Locke and Machiavelli, as well as the great medieval Islamic statesman Nizam al-Mulk, all named corruption as a threat to the realm.

In a thrilling argument that connects the Protestant Reformation to the Arab Spring, Chayes asserts that we cannot afford not to attack corruption, for it is a cause, and not a result, of global instability.

What listeners say about Thieves of State

This book could have been merely good, if the author simply shared her first-hand experiences with corruption. Instead, she went beyond by researching historic writings on corruption and drawing parallels to current day. In addition, she also gives many reasonable options for fighting corruption moving forward.

While some reviewers have found the narration to be "shrill," I found it had extra weight when the thoughts were stressed as the author intended. Some statements are meant to have impact and the voicing should reflect that.

All around this is an outstanding book. It moves beyond merely reporting on facts, to understanding causes, and recommending solutions.

A Must Read Book

Would you consider the audio edition of Thieves of State to be better than the print version?

I like the narrator -- she happens to be the author -- but have not read the printed book.

What does Sarah Chayes bring to the story that you wouldn’t experience if you just read the book?

It is a powerful, instructive account of reality. It should be required reading for us all.

Nothing to laugh about, but it is certainly "for to weep".

This book explains why our foreign-policy has been such an abysmal failure in achieving what is right for the world. It warms that are cherished freedoms are about to become owned by a bee and insidious corruption that we must prevent Through collective action

Where does Thieves of State rank among all the audiobooks you’ve listened to so far?

In terms of educating me, Thieves of State rises head and shoulders above other books I've listened to. I am much better informed about radical Islam, the U.S.'s approach to fighting terrorism, and the lack of understanding that our policy reflects.

What does Sarah Chayes bring to the story that you wouldn’t experience if you just read the book?

When I've read other novels and non-fiction that address our current world events, I rely on the knowledge I gathered from Chayes' book to validate other texts. Other authors address the problems of religious extremism but not with the analysis and facts that Chayes offers in this book.

A story at the end made me sob, but overall the book made me think.

best book I have ever read!

Sarah Chayes offers a highly textured and highly contextualized account of corruption in the world. She is wise, clear, and courageous. Thank gou so much for this masterpiece!

True clear and passionate a great read. We need more people like Ms Chates in the capital.

A clear explanation for Afghanistan

Ms Chayes clearly and explicitly explains the American failings and oversights that allowed the disasters in Afghanistan and Vietnam. And how the "military industrial complex" participated in them.

Sarah is skilled story teller weaving history and the most important events of our age together. While Thieves of State is non-fiction, Sarah pulls tricks from the novelist's kit to offer surprises and twists -- which I will not disclose, That's for you to enjoy. If you are a curious person whilst willing to be challenged to see our institutions in new light, read this book without delay.

This is a book that will challenge you to rethink what corruption is and how it influences revolutionary and even religious extremists as well as modern Western democracies. The author was a journalist on assignment in Afghanistan but gave that up for a chance to not just write about problems but be a part of solving them. She began working with a non-profit in Afghanistan and eventually became an advisor to the US government development efforts. Because of her many years in Afghanistan and her experiences, a significant portion of the book deals with Afghanistan, but she also discusses disparate places such as the countries across North Africa, Cambodia, Uzbekistan, and others. She posits that the American view that the Afghan government is weak and must be supported militarily overlooks the real problem, that the government is actually very strong but is not designed to govern. It is designed as a vertically oriented criminal enterprise with money flowing to the top. It’s not a patronage system where the leaders preserve power by paying off those below, but where those below, beginning at the very bottom, pay just a little to their immediate superiors to keep their jobs and they pay some to their superiors and on up the chain. The US has thought that providing security is a precursor to good government, but she would say that good government is what actually provides security. She also goes back into historical writings ranging from ancient Muslim scholars, to Machiavelli, Martin Luther, and John Locke. Her basic thesis is that while not the only threat, corruption is the most important threat to world security and the prime mover of revolutionary movements. It is when people lose faith in public institutions and decide that anything is better than the status quo. They will then follow anyone who gives a promise to clean up the system. And, in the end, she shows that corruption is not limited to developing countries and notes that the big US financial collapse in 2008 was due to corruption and notes that though some financial institutions went under, most were bailed out and no significant person was prosecuted. The fear of the American democratic experiment in the beginning was that corruption would take root and give opening to a strong man taking power. I was reminded of the famous response by Benjamin Franklin concerning the result of the constitutional discussions, so what were they creating? His answer, “A republic if you can keep it.” This book was published in 2015, but seems to have presaged what we are facing today, when people are willing to overlook the checks and balances built into our system of government in order to get things done. I’ll go back to the first sentence of this review and repeat that this book will challenge your thinking about corruption and the state of American politics. The swamp is not political, per se. It’s the influence of money floating to the top of the chain, where no one can reach political office without money and lots of it. You either get it by becoming beholden to lots of donors, or by being very rich yourself. This is a book that you need to read.