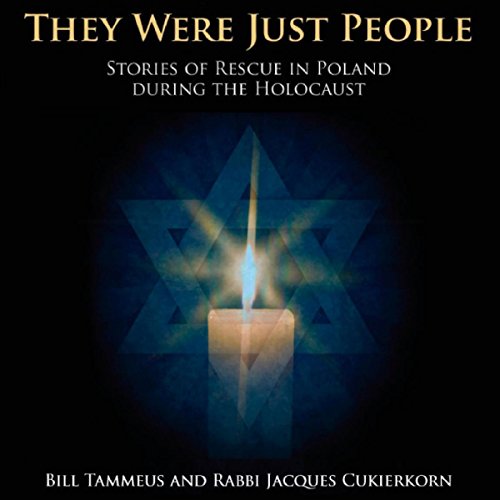 They Were Just People

By: Bill Tammeus,Jacques Cukierkorn
Narrated by: Charles Kabala
Try for $0.00

Hitler's attempt to murder all of Europe's Jews almost succeeded. One reason it fell short of its nefarious goal was the work of brave non-Jews who sheltered their fellow citizens. In most countries under German control, those who rescued Jews risked imprisonment and death. In Poland, home to more Jews than any other country at the start of World War II and location of six German-built death camps, the punishment was immediate execution.

This audio tells the stories of Polish Holocaust survivors and their rescuers. The authors traveled extensively in the United States and Poland to interview some of the few remaining participants before their generation is gone. Tammeus and Cukierkorn unfold many stories that have never before been made public: gripping narratives of Jews who survived against all odds and courageous non-Jews who risked their own lives to provide shelter.

These are harrowing accounts of survival and bravery. Maria Devinki lived for more than two years under the floors of barns. Felix Zandman sought refuge from Anna Puchalska for a night, but she pledged to hide him for the whole war if necessary - and eventually hid several Jews for 17 months in a pit dug beneath her house. And when teenage brothers Zygie and Sol Allweiss hid behind hay bales in the Dudzik family's barn one day when the Germans came, they were alarmed to learn the soldiers weren't there searching for Jews, but to seize hay. But Zofia Dudzik successfully distracted them, and she and her husband insisted the boys stay despite the danger to their own family.

Through some 20 stories like these, Tammeus and Cukierkorn show that even in an atmosphere of unimaginable malevolence, individuals can decide to act in civilized ways. Some rescuers had antisemitic feelings, but acted because they knew and liked individual Jews. In many cases, the rescuers were simply helping friends or business associates.

"A wonderfully written, engaging book providing a perspective that sadly is often missing when reading about the Holocaust." (Dr. Carol Rittner, RSM, Distinguished Professor of Holocaust and Genocide Studies, The Richard Stockton College of New Jersey)
" They Were Just People is an important contribution to the literature of rescue during the Holocaust." (Stanlee J. Stahl, Executive Vice President, The Jewish Foundation for the Righteous)

What listeners say about They Were Just People

Unforgettable Stories of Heartache and Mercy

If you could sum up They Were Just People in three words, what would they be?

They Were Just People is a compilation of intimate stories from first-hand survivors of the Holocaust in Poland.

Zygie and Sol Allweiss's story as teens is a fascinating account of their harrowing escape from the Nazi's. It's also a story revealing the kindness of their non-Jew Polish friends and neighbors who care for them throughout the war.

Which character – as performed by Charles Kabala – was your favorite?

Since the authors investigated and reported the memories of over twenty brave individuals, I could not just choose one. Charles Kabala's authentic tone brings to life each survivor and rescuer. I was drawn into every nuance and detail of each story. Since the events of the stories are intense and rich, I appreciate Mr. Kabala's steady pacing that gave me time to digest the narrative.

I could only listen to a few stories in one sitting--probably because the subject matter was not fictional, but rather unthinkable life or death situations and often disturbing.

Mr. Kabala's voice is smooth and calming. He pronounces with ease the (unfamilair and difficult) Polish names. While listening to the heartbreaking stories, I was impressed with his ability to concurrently express warmth. I recommend this audiobook.

What would I have done?

This audio kept my interest the whole time. All true eye witness accounts. Although I’m an American a generation after the holocaust I wonder what I would have done. I would have helped not for money but because I’m a Christian IF I was single. But having a family is something else so I don’t know. The discussion questions at end of story very difficult to answer. But I would love to be in a study group pondering such things I can only leave with the comment “what
satan means for evil God Means for good”