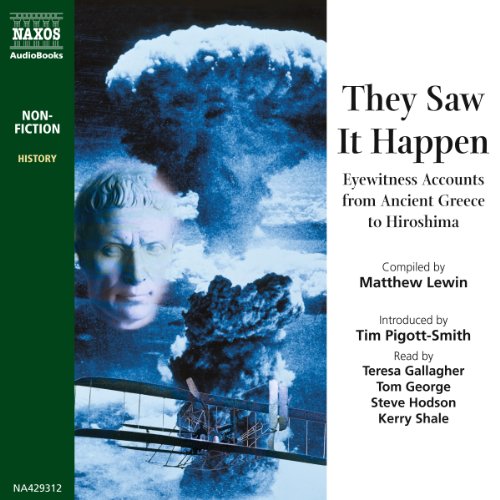 They Saw It Happen

By: Compiled by Matthew Lewin
Narrated by: Tim Pigott-Smith,Teresa Gallagher,Tom George
Try for $0.00

Here are more than 60 eyewitness accounts of notable historical events beginning with the Spartans at Thermopylae in 480 BC through to and including the Bombing of Hiroshima in 1945. Hear of the Black Death of the 1340s, the 1666 Great Fire of London, the Boston Tea Party in 1773, the 1793 Execution of Louis XVI, the Death of Vice Admiral Nelson during the Battle of Trafalgar in 1805, the American Civil War (1861-1865), and San Francisco's 1906 Earthquake which killed thousands of people and injured hundreds of thousands more.

Meet Marie Antoinette, Stanley & Livingstone, Charles Lindbergh, and others. And there are also snapshots of more ordinary life, no less memorable for all that, including working conditions during the Industrial Revolution of the late 1700s and early 1800s, views of slaves and their owners, Paul Gauguin (1848-1903; one of the leading French painters of the post-Impressionist period), who chose a bride on Tahiti, and the 1910 arrest and death of Dr. Crippen. It is a fascinatingly unique and absorbing collection, bringing the past alive as only direct memories like these can do.

"In a unique approach to understanding our past, Naxos has combined the eyewitness accounts of 60 people into a fascinating chimera of historical events....Whether you're with Charles Lindbergh looking for the Paris airport at night or Samuel Pepys watching the Great Fire of London, your fantasies will travel through time and space in a whirlwind of memorable episodes." ( AudioFile)

What listeners say about They Saw It Happen

I enjoyed the "rest of the story-esque" information about significant events in history.

The narration tended to be a bit drab.

Could you see They Saw It Happen being made into a movie or a TV series? Who should the stars be?

Not really if only because it is composed of many rather small vignettes of history...but I suppose on a History channel venue it might garner a lot of interest. I'd watch it.

This recording consists of eyewitness accounts of historical events. I found it to be a good listen.