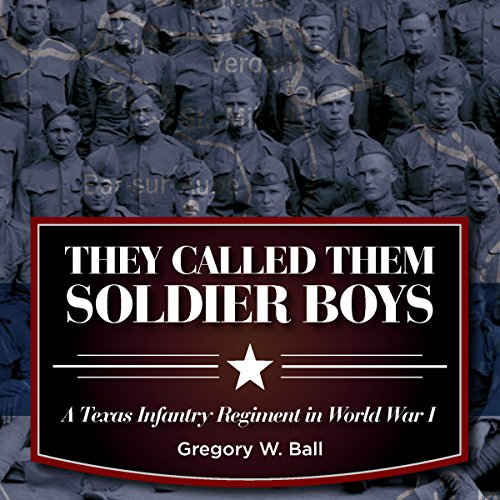 They Called Them Soldier Boys

They Called Them Soldier Boys offers an in-depth study of soldiers of the Texas National Guard's Seventh Texas Infantry Regiment in World War I, through their recruitment, training, journey to France, combat, and their return home. Gregory W. Ball focuses on the 14 counties in North, Northwest, and West Texas where officers recruited the regiment's soldiers in the summer of 1917, and how those counties compared with the rest of the state in terms of political, social, and economic attitudes.

In September 1917 the "Soldier Boys" trained at Camp Bowie, near Fort Worth, Texas, until the War Department combined the Seventh Texas with the First Oklahoma Infantry to form the 142nd Infantry Regiment of the 36th Division. In early October 1918, the 142nd Infantry, including more than 600 original members of the Seventh Texas, was assigned to the French Fourth Army in the Champagne region and went into combat for the first time on October 6. Ball explores the combat experiences of those Texas soldiers in detail up through the armistice of November 11, 1918.

"An eminently solid work, well-researched and well-written." ( On Point, the Journal of Army History)
"Highly readable; it is strongly suggested to anyone interested in wishing to sense the atmosphere of rural Texas in the early 1900s or the United States' involvement in World War I." ( Journal of South Texas)
"A valuable blending of social and military history...This book will be of interest as much to historians pondering the social implications of war as to military historians of World War I." ( Southwestern Historical Quarterly)

What listeners say about They Called Them Soldier Boys