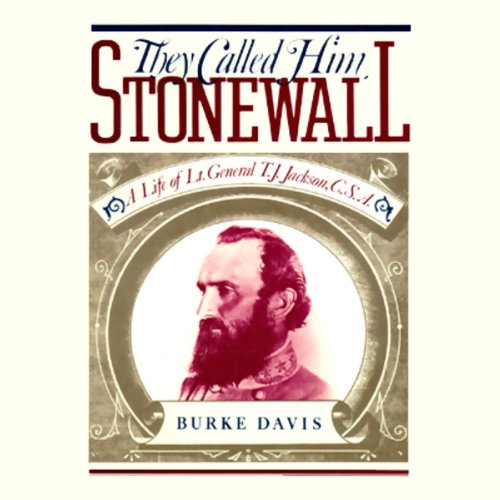 They Called Him Stonewall

By: Burke Davis
Narrated by: Christopher Hurt
Try for $0.00

Stonewall Jackson was a military genius, at once peculiar and perfect, a fearless soldier in battle but a God-fearing man who hesitated to kill on Sunday. He broke the rules of war to win, and yet his tactics are studied in military academies the world over.

From the remarkable Valley Campaign through the Seven Days, Manassas, Antietam, Fredericksburg, and the masterful though tragic sweep at Chancellorsville, where Jackson was felled by one of his own soldiers, this is a compelling narrative of men and war. Burke Davis brings the color, vivid characterization, and immediacy of the best fiction to this fascinating biography.

What listeners say about They Called Him Stonewall

This was an excellent audiobook. I learned many new details about Jackson's life, which I never knew before. The story was riveting and I also really enjoyed learning much more about Jackson's life as a young man, and about his marriages and family. This was a completely new side to him from my perspective. I also thought that the narrator did a very nice job with the reading. I highly recommend this book if you are interested in biographies, military history or the American Civil War.

What did you love best about They Called Him Stonewall?

The book revealed the mystery and ability that characterized this amazing man.

What other book might you compare They Called Him Stonewall to and why?

THAT DEVIL FORREST, about another military genius

What does Christopher Hurt bring to the story that you wouldn’t experience if you just read the book?

His "rendition" of Jackson's voice.

I don't think that many people I know would like this book, however it appeals to me as I attempt to tackle as much of the civil war understanding as I can. This book put me into the mindset of the men in action and shows the strategies they forged and the times they feared and hated the yankees. Their hope... such as when Stonewall constantly sent money back home for his wife to buy confederate bonds. This was a great way for me to learn enough about Stonewall to attempt other civil war books. I felt the narration was very good.

They Calle Him Stonewall

The book is an excellent account of the period in the Civil War in which Stonewall Jackson served the Confederacy and his major contribution to its' early successes; and the loss that Robert E. Lee felt after the death of Stonewall.

An ode to a memorable man

I enjoyed this audio book very much. it is filled with details and is pretty thorough. My own personal view is that there is too much liberty taken with what might have happened, or said.

Another excellent study of General Thomas Jonathan "Stonewall" Jackson ! All of Burke Davis' books of the Confederate leaders are fantastic including Robert E. Lee "The Gray Fox" h JEB Stuart "The Last Cavalier". Not only a great book by a great author but also very well read. I recommend it !

Great narration it really brings him to life

this is a great story about a great man who fought for the state he loved.

I must of rewinded this book a hundred times. I love the conversations, the exchange between characters, the southern twist of the tongue..Five star book...I'm going to have a hard time finding an equal...

I really enjoyed this book, it was easy to listen too and was well written with great narration. I would recommend it.

Drones on and on

While this is the definitive book on Stonewall Jackson, I found it a very difficult listen and quit listening after only about 20% as it began to sound like "Charlie Brown's teacher." A student of the Civil War with maps and a desire to "study" could probably wade through the minutiae of counties, roads and battle engagements in Virginia, but I find those things droll and stimulation free. Maybe the book version is a better way to take this on. The casual reader/listener should avoid this book.