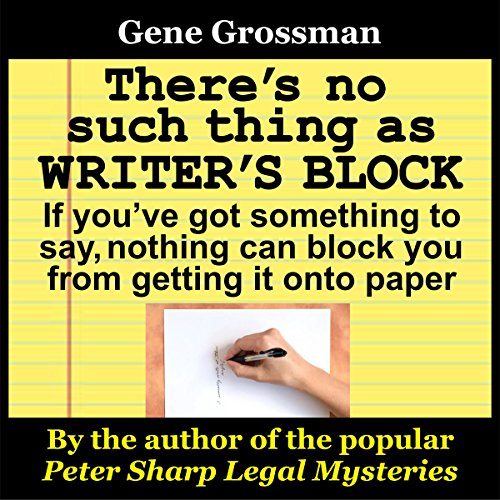 I've written almost 50 books, of which 20 are a series of mysteries, and I've never suffered from what they call writer's block for one main reason: I don't sit down at my computer intending to write until I have something to say - and the only thing that slows me down is not having something to say, it's trying to figure out the best way to say it.

I don't claim to be able to sit down and instantly think of things to say, having not thought about it previously, unless I'm writing a non-fiction book on a subject I know like the back of my hand - and then I'm like an old performer that opens up the refrigerator door and when the light goes on, I do a half-hour.

Not everyone has something to say, but still wants to write a book because there's a story in them fighting to get out, so the purpose of this book, about there being no such thing as writer's block, is what I have done to eliminate it from my writing process, and can help others to do the same.

I don't plan to sit down and force myself to write every day for a set amount of hours just to get a certain amount of words onto the screen: I have a mental process I practice that gives me things to say, so that I can't wait to get to my desk to start them flying into the computer at a rate of over 75 words a minute, of which more than half are typos, but at least they're on the paper, and for corrections - well, that's what editors were born for.

In this audiobook I also go into a lot of things not to do, and discuss the pros and cons of also doing a book in the audio format, for distributors like Audible.com. Overall, I believe that this audiobook covers things that the writing courses don't touch upon, because I never heard about them in the writing classes I attended. This audiobook is the perfect audiobook for any person that wants to write a book, or a gift for someone that wants to.

What listeners say about There's No Such Thing as Writer's Block