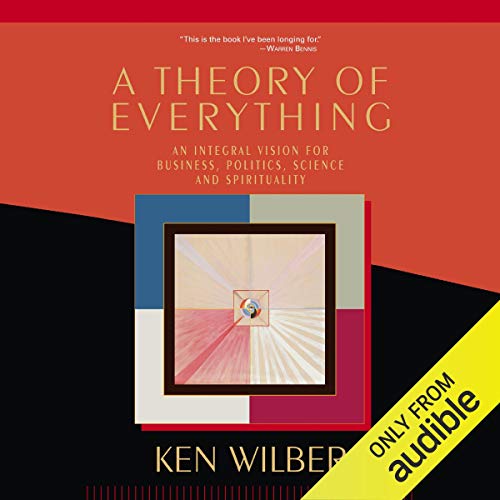 Here is a concise, comprehensive overview of Wilber's revolutionary thought and its application in today's world. In A Theory of Everything, Wilber uses clear, nontechnical language to present complex, cutting-edge theories that integrate the realms of body, mind, soul, and spirit. He then demonstrates how these theories and models can be applied to real-world problems in areas such as politics, medicine, business, education, and the environment. Wilber also discusses daily practices that readers take up in order to apply this integrative vision to their own everyday lives.

What listeners say about Theory of Everything

This book is embarrassing... or it should be. I am not sure the author is aware of how stupid this all is.

inspiring, concise, well grounded. An.undeniable contribution to human progression and happiness. you.might not agree with the author's statements.but you will definitely benefit from them

As someone who has studied integral thought for a decade, I found this short overview an excellent resource to remind me of the most critical aspects of the theory and will serve as a way to introduce others to integral thought.

Interesting but not riveting

The content reads like a text book. Very interesting stuff. Unfortunately, presented in a way that made it difficult to stay focused.

The narrator was quite good though.

Not anything I would ever acquire if I have a choice

Nothing like its title implies. I would not use Theoty of Everything which implies Physics NOT Metaphysics

Skip this one, at least on audio

I don’t think I’ve ever been more bored by ideas I basically agree with. I spent the vast majority of this audiobook waiting for it to be over so I could listen to something enjoyable next.

The author tediously lays out a color system of world views that is more work to learn than it is valuable. Later in the book he just lists names for about a minute, so have your fast forward button handy.

The best ideas of the book could be summarized in a sentence. Some things are whole entities into themselves while also being parts of other things, and whatever intellectual progress humans make is uneven because new humans are always being born and only some of them will progress through the levels of consciousness, or whatever.

I’ll be amazed if I read or listen to another book by this author who manages to synthesize everything without saying anything.

In the brief amount of time I listened to it, it succeeds in completely mis-stating the second law of thermodynamics, and string theory, and proceeds to talk about those things as if they explain great mysteries. It is stunningly anti-intellectual, vapid, shallow, and makes me worry that integral management theory is based upon the same weak ideas, and it is integral management theory which I wished to learn more about. I just can't go further, as I have lost all respect for the author.

What could Ken Wilber have done to make this a more enjoyable book for you?

Ken Wilber could have spent more time actually learning about the science he misrepresents, and could have had actual scientists review his work. He didn't. That makes this work intellectually dishonest and self-serving drivel.

What character would you cut from Theory of Everything?

I would have cut Jimmy McPseudoscience, as this radically underdeveloped character detracts from every part of the story he is in.

I want my money back, and I want a public apology from the author to all the people whose delusions he has fueled.

Thank you, Ken. I went ahead and bought all of your books, paperback. Great narration.

I first read this book over five years ago and loved it. However it took revisiting ToE at this stage in my life to truly appreciate its brilliance.

The narrator, Fajer Al-Kaisi, presented the book very well; I felt his tone executed the message across accurately and precisely.

Ken Wilber, the author, has approached a logical standpoint I hold genuine respect for; a perspective that is understandably difficult for some to fathom, nevertheless one that is so desperately needed and long overdue in this world.

I encourage others to read this with an open perspective; depending on your level, I would (personally) encourage breaks so you can continue to stay engaged. It's potentially a heavy read for some; but incredibly worth it.

I also encourage others not to potentially feel defensive for any personal assumptions within this book, but to feel enlightened for a tangible outlook on the world as a whole. Then again, everyone's entitled to their own opinion; mine enjoyed this and I have already recommended it to many.

If you've read any holistic books on the meaning of life, philosophies on how we should live our lives and how we should interpret events around us. You will see these threads interrupted by Wilber and put into his own pigeon holes and colored in to try to make a pattern of everything. I found these incredibly over bearing and unnecessarily complex. Its presented as a Bible based on his views of how he sees everything slotted together. All very valid points of view but presented in a way that makes it sound like the ramblings of a mad man.

If the author quotes another one of his works one more time as a reference... This book is boring and dry. The reader is flat and uninteresting. It sounds like an academic lecture and tries to scan like an academic work with lots of references. And given nearly all the references are to the author's other works or to works the author claims to have influenced - then it just ends up sounding like bragging, If there is an actual IDEA in this book, then our dear self important writer takes so long to get to the actual point that I have... Ah wait - yes of course - DIED - death of ego - enlightenment - is this what he tries to achieve? Bore the listener to death and hope the ego drops away? I can't imagine what it must be like being this man's poor wife - or maybe "honey I have this idea" is the perfect way to get to sleep every night? Sorry - what is this book about again!

An incredibly fascinating discussion of the phenomena of the how human evolution. The author successfully attempts to make sense of the worlds diverse views on spirituality, politics and culture.

The narrator mispronounced a lot of words!! Irritating listening despite great content. It sounded like the narrator’s first and only read-through.

This is a must-read/listen for all, especially those coming into integral consciousness. Having known Graves’ theories/Spiral Dynamics for many years and found to incredibly useful to my own and others’ transformation journeys, it was reassuring to find it take centre stage in this book. Many new insights and concepts to expand my view of the world today and into the future. Ken Wilbur is so advanced in his thinking - May we all learn from his wisdom!