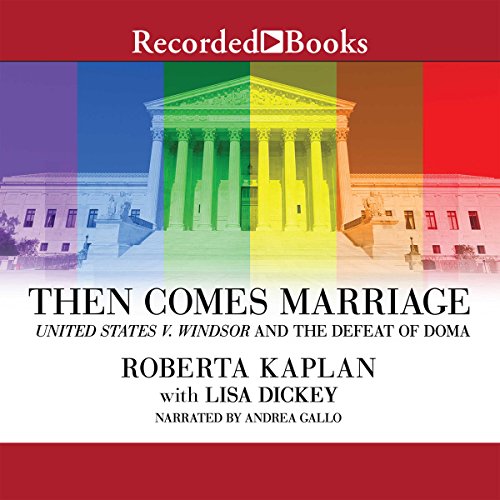 By: Roberta Kaplan,Lisa Dickey
Narrated by: Andrea Gallo
Try for $0.00

Roberta Kaplan's gripping story of her defeat of the Defense of Marriage Act (DOMA) before the Supreme Court.

Attorney Roberta Kaplan knew it was the perfect case. Edie Windsor and Thea Spyer had stayed together, for better or worse, for 44 years - battling through society's homophobia and Spyer's paralysis from MS. The couple married in Canada in 2007, but when Spyer died two years later, the US government refused to recognize their marriage, forcing Windsor to pay a huge estate tax.

In this landmark work, Kaplan describes her strategy in the lower courts and her preparation and rehearsals before moot courts, and she shares insights into the dramatic oral argument before the Supreme Court justices. Then Comes Marriage is the story of the relationship behind the watershed case, Kaplan's own difficult coming-out journey, and the fascinating unfolding of United States v. Windsor. Full of never-before-told details, this is the momentous account of a thrilling historic and political victory for gay rights.

What listeners say about Then Comes Marriage

One of the most engaging, impacting books I have come across in a long time

On the heels of another anniversary of a historic day for equality in the US, June 26, 2015, will forever be a day that will be cherished and remembered by all that LOVE WINS! Then Comes Marriage: United States v. Windsor and the Defeat of DOMA shows us that love not always won, but those who fought and persevered for equal rights not only won the fight against DOMA, but also paved the way for the rights we have today! This part memoir, part legal procedure story tells us about how Roberta Kaplan took on Edith (Edie) Windsor's case against the advice of others and won! The trials and tribulations that both Roberta and Edith went though from the lower courts of Manhattan all the way to the Supreme Court to fight for marriage quality is undeniably moving and brilliant!