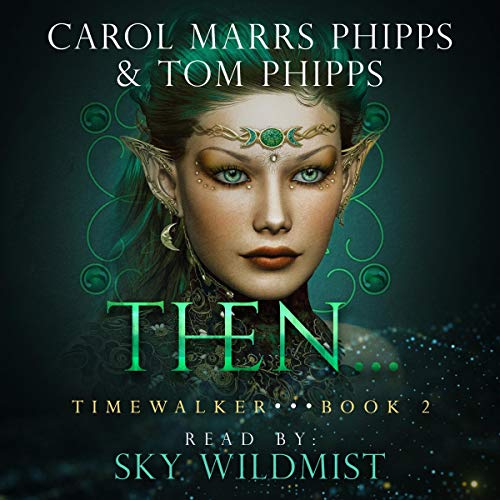 Will Pandora and her World Alliance rule from Atlantis, under the sea...until the world above no longer breathes?

The much awaited sequel to the highly acclaimed dystopian fantasy novel, Wham! is here.

"Zipping from the gorgeously enchanting to the darkly terrifying, Then... is dystopian fantasy at its finest. And it's even better than book one." (Stuart Kenyon, author of the Subnormal series and Swiftly Sharpens the Fang)

While the underground frantically works to mount a resistance against Pandora and the World Alliance, the potentate’s evil grows.

She stages withering chemical attacks wherever the underground may survive. She passes more laws to hamper their movements.

And new inventions to control their minds.

And as Nia grows heavy with the potentate's child, her desperation to escape before the birth turns to panic.

Get ready for hours of entertainment, from the busy pens of Carol Marrs Phipps and Tom Phipps.

This is my second audio book that I’ve heard, and I’m hooked. I love listening to stories. Especially by confident, competent, and energized speakers. Which is exactly what this audio-narrator does. Effectively she evokes imagination and immediately you are thrown into the world of the story. That alone is pure magic. The fact that as you listen, you are transported into another world, that being the world of the story. Fantastically done. Professionally done.

The story itself is worthy of 10 stars. This is the sequel to the wonderful story WHAM. The adventure picks right back up and you do not feel left behind. Tess and Nia are a duo that demonstrate believable struggles and the many obstacles that they face. There are a lot of characters within this tale and each one of them crafted with a realism that most authors can’t do. But, Carol Marrs Phipps and Tom Phipps have cleverly created characters that are just as believable as that of those in Lord of the Rings.

This is an entertaining tale that will throw you into a whole new world. With creativity that takes you on a trip to another place in a world filled with characters, magical beings, and different languages. All of it taking you on an unforgettable journey.

The evil speaks volumes and can give one goosebumps, throughout this tale. With the world under great threat and with the fate of Nia’s baby comes much action and determination. It is full on with the world alliance set to destroy their very world. Everyone has to work three times harder against the world alliance. Without giving any spoilers away, the only logical advice I can offer comes with exceptional high recommendations that you yourself listen to this story, or get the book to read it. Without a doubt, I highly recommend and I’ll be keeping my eyes on full alert for another book in this series.