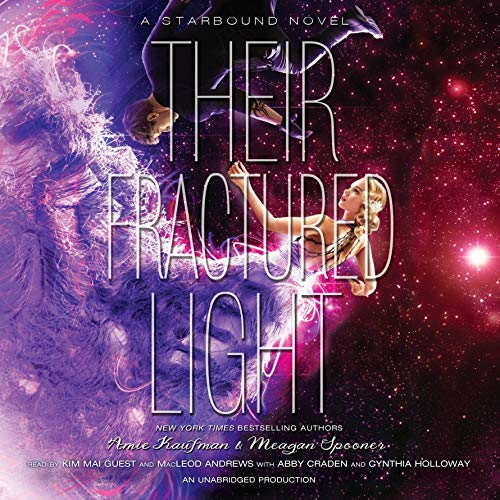 A year ago, Flynn Cormac and Jubilee Chase made the now infamous Avon Broadcast, calling on the galaxy to witness for their planet and protect them from destruction. Some say Flynn's a madman; others whisper about conspiracies. Nobody knows the truth.

A year before that, Tarver Merendsen and Lilac LaRoux were rescued from a terrible shipwreck - now they live a public life in front of the cameras and a secret life away from the world's gaze.

Now, in the center of the universe on the planet of Corinth, all four are about to collide with two new players, who will bring the fight against LaRoux Industries to a head. Gideon Marchant is an 18-year-old computer hacker known in Corinth's underworld as The Knave of Hearts. He'll climb, abseil, and worm his way past the best security measures to pull off onsite hacks that others don't dare touch.

Sofia Quinn has a killer smile, and by the time you're done noticing it, she's got you offering up your wallet, your car, and anything else she desires. She holds LaRoux Industries responsible for the mysterious death of her father and is out for revenge at any cost.

When a LaRoux Industries security breach interrupts Gideon and Sofia's separate attempts to infiltrate their headquarters, they're forced to work together to escape. Both of them have their own reasons for wanting to take down LaRoux Industries, and neither trusts the other. But working together might be the best chance they have to expose the secrets LRI is so desperate to hide.

What listeners say about Their Fractured Light

And oh what a beautiful ending it was. I always have mixed emotions when a series comes to an end – will it be a satisfying conclusion? How much will I miss these characters? It’s always a roll of the dice when starting a new trilogy – but when it comes to such a perfect ending like the Starbound Series it’s no wonder I keep coming back for more.
Without giving away any spoilers, this was another story of star-crossed lovers that have an important part in stopping LaRoux Industries from taking over the world. All the previous couples are back and I loved how the author weaved their stories together. I also enjoyed getting a deeper understanding of the Whispers – having an insight into their thoughts just added a layer of complexity that was missing from the first books.

This was a fantastic ending to a beautiful series.

Third in series, must read in order

This is the third & final book in this series. It has an intriguing plot but can get confusing.

The first book was my favorite & if you made it through the twists at the end of that then you probably continued on to the second.

Two reasons why these books get progressively confusing/complicated:
1. The first book has 2 main characters, Lilac & Tarver. They are pretty isolated so it's a basic chapter by chapter POV alteration.
The second book barely involves the original 2, focusing on a new pair Flinn & Jubilee. However they are far from alone & there are many flashbacks to when they were children.
By the final book we have a much broader stage, a new couple, more flashbacks that go back to all 6 character's pasts & a lot of conflicting secret schemes.

2. The second reason for confusion is sort of a spoiler & I don't quite know how to explain without giving anything away.
I can say that all 3 books take place in a future that has space travel & colonization on many different planets. All 3 books take place on different planets & as everything is tied together it's not as neat & clean a bow as it could be.
Another round of editing would have helped.

Having said all that, I did enjoy all 3 books, listening to them back to back helped. And despite my confusion at times I genuinely cared about the story.

not bad, not great. the ending stretched a bit...with "action without action". butpasses the time.

Their Fractured Light completes the Starbound trilogy, bringing characters from the previous books together in order to finally solve the mystery of the Whispers. Authors Kaufman and Spooner did an excellent job of creating three sets of distinct pairs and creating challenges for each that tie in to the overall story. The denouement is action packed and, if not unexpected, makes sense for the overall theme.

Story: Sofia is undercover and with one mission - to kill the man (LaRoux) responsible for her father's suicide/death. Gideon is a hacker living in the underground and controlling information. When their paths cross at an interrupted assassination attempt, they soon learn there is much more to fear than just LaRoux. For there is a Whisper who has been perverted and wants revenge - on all of humanity.

We see the return of Lilac and Tarver, Flynn and Lee, we come full circle back on Corinth. The introductions in the beginning of the chapters tell the story of just what LaRoux has done, making it becomes obvious why things are in the state they are in.

The first 3/4 is the story of Sofia and Gideon's uneasy alliance and having to learn to trust. Both have secrets they wish to protect and very different goals. But as LaRoux security begins to track them down, they will have to learn to trust each other and then also Flynn/Lee/Lilac/Tarver. As they all come together, it's each of their unique skills that will be called upon to save Corinth and the humans from destruction.

The narration of this book was top notch, though I found the chapter headers given in Whisper voices very hard to understand. But in all, an excellent and well-written series.

Mind numbingly stupid ending even for a work of fiction. This was not science fiction but the most saccharin if romances.

I really enjoyed this final installment in this trilogy. I liked how it brought the characters from the previous two books back into the series to conclude it. That made this story wrap up really nicely.

I've read this series twice and listened to the audiobook a couple times. the characters and voice actors are amazing!

A fantastic end to an amazing trilogy of books.

I'm so incredibly sad that that this is the end of what has been an incredible journey. The stories have been so well crafted and the narrators couldn't have done a better job of breathing life into the wonderful personalities that are in such abundance throughout all of the Starbound books from start to finish. I am definitely going to be reading more books from both of these very talented authors.

Absolutely incredible finish to a great trilogy. Tied everything together beautifully. Satisfying end! This trilogy was a great listen.

I loved the three books separately and together. This was my first time listening to a sci-fi ya series and I loved it.