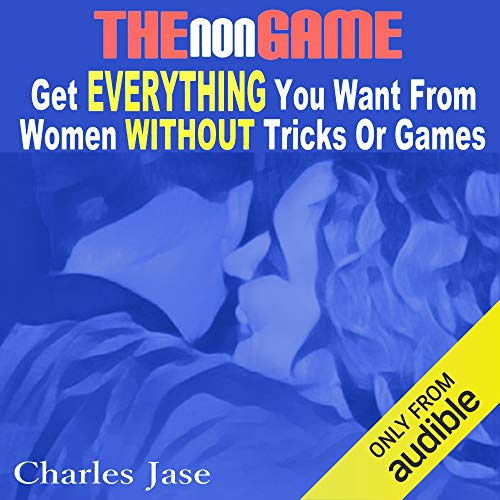 "Bad boys" believe that if they hide their playful sides, act elusive, and like they don't care, women will be attracted to them. Yet it is just this nonacceptance of parts of themselves that make women not accept them either.

"Nice guys" often try to prove their value to women in hopes of being accepted or valued enough that the ladies will want them in their lives. What they don't understand is that women actually get turned on by men who are already fully accepting of themselves and who don't need women to validate their worth.

What if there was a secret recipe to attraction that told you exactly what types of "niceness" and "edginess" truly attract women?

Join the author as he not only reveals the ingredients, but takes it a step further by letting you hear him apply his own concepts in the real world, with real women, live on the streets of Las Vegas!

Attraction is not what you say or do, but who you are. 80% of who you are is revealed to the world before your first word is spoken. So change yourself into the most creative, confident, self-contained, non-needy, best, and most attractive version of you!

Some subjects you will learn about:

What listeners say about The nonGame

I listened to the sample audio and decided to check this book out; it wasn't exactly what I expected. There are definitely some good ideas and concepts, some good thought patterns to adopt, but it was a little too motivational speaker-esque for my tastes. There is actually a sort of guided meditation section at the end of the audio book lol.

Much more than a manual on how to pick up women, CJ opens the door to a new normal. How to enjoy and get the most out of life by reconnecting to your inner child.

BEST SELF HELP BOOK YET

Yes, it takes all the convoluted, manipulative, "pick up artist" ideas and throws them out the window. It gives clarity to what a high level man is and how he acts. It's a natural game/inner game type of book, but really it's not about game at all. It strips away the layers of complexity in a man like an onion and gets you to think differently at the very core of yourself.

What other book might you compare The nonGame to and why?

What does Charles Jase bring to the story that you wouldn’t experience if you just read the book?

Self awareness, self love, I particularly love how he describes a high value man as being the "Sun" in the room that shines bright from within. This shining light creates attraction and pulls people into you like the gravitational pull of the sun. Love it!

Turkey ceiling (aka pick up artists)

completely different way of looking at life in general definitely a must listen. he teaches a way most people have forgotten. it was like a breath of fresh air on how to live your life. I've definitely gotten lost along the way on how to be and im glad for the reminder. ive lived both sodes he refers to and am glad to find out through this book why the negative transitions would take hold every so often. very helpful buddy, keep up the good work.

it was honesty fantastic

This was a different perspective from all the dating books I have read. I truly enjoyed every chapter and I can't wait to listen to it again.

a sad little book that had great potential

This little book headed in the right direction by telling the reader that if you want to truly attract women spend a little time and get to know and listen to them, and then truthfully tell them what you feel. But the pitiful author (who horridly self read the book) couldn't resist turning a great message into a series of recorded pick-up lines and strategies. Maybe someone with a good voice for thoughtfully conveying information will mercifully rerecord much of the first half of this book and leave it at that. But after hearing this version, I don't think I will ever get the slime out or my ears.

I give this book five stars for being true to himself and natural. I can relate to what he says throughout his work.

Great book, really helpful, probably too short but otherwise excellent, also the audio bits are not clear but that's understandable