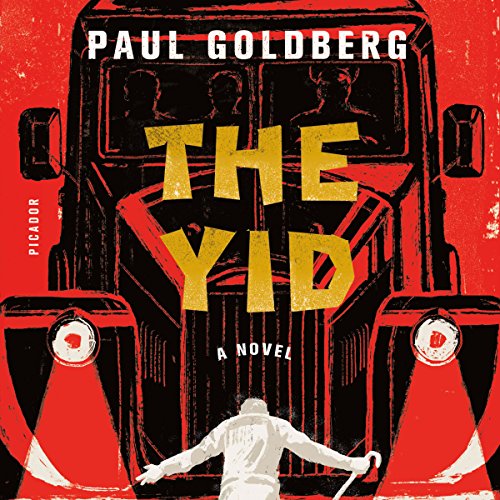 By: Paul Goldberg
Narrated by: Peter Berkrot
Try for $0.00

A debut novel of daring originality, The Yid guarantees that you will never think of Stalinist Russia, Shakespeare, theater, Yiddish, or history the same way again.

Moscow, February 1953. A week before Stalin's death, his final pogrom, "one that would forever rid the Motherland of the vermin", is in full swing. Three government goons arrive in the middle of the night to arrest Solomon Shimonovich Levinson, an actor from the defunct State Jewish Theater. But Levinson, though an old man, is a veteran of past wars, and his shocking response to the intruders sets in motion a series of events both zany and deadly as he proceeds to assemble a ragtag group to help him enact a mad-brilliant plot: the assassination of a tyrant.

While the setting is Soviet Russia, the backdrop is Shakespeare: A mad king has a diabolical plan to exterminate and deport his country's remaining Jews. Levinson's cast of unlikely heroes includes Aleksandr Kogan, a machine-gunner in Levinson's Red Army band who has since become one of Moscow's premier surgeons; Frederick Lewis, an African American who came to the USSR to build smelters and stayed to work as an engineer, learning Russian, Esperanto, and Yiddish; and Kima Petrova, an enigmatic young woman with a score to settle. And wandering through the narrative, like a crazy Soviet Ragtime, are such historical figures as Paul Robeson, Solomon Mikhoels, and Marc Chagall.

As hilarious as it is moving, as intellectual as it is violent, Paul Goldberg's The Yid is a tragicomic masterpiece of historical fiction.

What listeners say about The Yid

The reader is absolutely outstanding and delivers this dramatic comedy superbly. Perfect for anyone with some German or yiddish language skills .

I was totally captured by the deep portrayal of the band of misfits and here dark humor packed adventure to take down the great Stalin himself!

Good story but a bit tedious.

We get the point that the protagonists are all Jewish Russians in the 1950s, but if the listener understands neither Russian nor Yiddish, we have to wait patiently for the translation, a situation that occurs about every 2 1/2 minutes. This is a book that most people will be happier reading than listening to.

There is a glitch in the iphone version of the book, 6hr 20min into the story, which persists for most of chapter 14 (like a needle stuck in a groove).

Sadly, this is a metaphor fo the entire book; the Russian & Yiddish dialog followed by repetative translation into English was 9cute for a few moments, then an annoying waste of time! On occasion this may have been appropriate (to demonstrate the rhyme and metre of song or poem). Goldberg's characters regularly lapse into Russian or Yiddish, then he offers up the translation of everyday speech for no literary purpose.

In a print version, one might skip past the linguistic fluff. In audio, one does not have this luxury. I rarely read abridged books; this audiobook would benefit from abridgement.