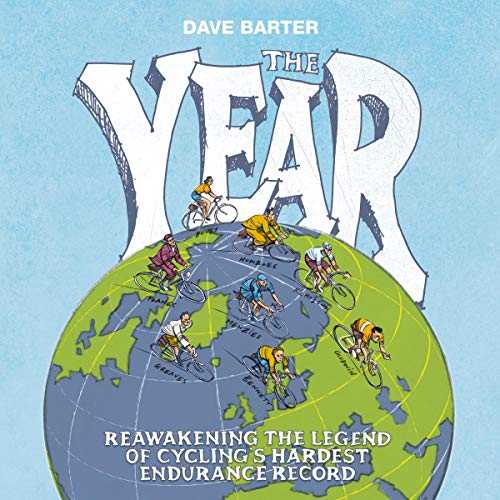 By: Dave Barter
Narrated by: Saethon Williams
Try for $0.00

In 1939 British cyclist Tommy Godwin cycled 75,065 miles in a single year. Think about that for a second: it’s an average of over 200 miles each day. And it’s a mark that still stands after almost 80 years. In The Year, Dave Barter resurrects the legend of the year record - a challenge nearly as old as bicycles themselves - and the cyclists who pushed themselves to establish and break it.

Barter uncovers the stories behind these riders who would routinely cycle over a hundred miles a day in the race to set new records. Americans such as John H. George who recorded over 200 "centuries", 19 double "centuries" and three triple "centuries" in the late 1800s. The British advertising executive Harry Long, whose annual tallies of over 20,000 miles in the early 20th century led to the founding of the formal cycling year record and Cycling magazine’s Century Competition.

The Englishman of French descent, Marcel Planes, whose 1911 record of 34,666 miles stood for over 20 years. Not forgetting the legends of the job-seeking Arthur Humbles, the one-armed vegetarian communist Walter Greaves, the "keep-fit girl" Billie Dovey and the staggering mark set by Godwin who left a youthful Bernard Bennett trailing in his wake.

Meticulous research through the annuals, archives and news stories of the bicycling world is backed up with insights from the families of these legendary cyclists, as well as Dave’s own analysis of the riders’ years in numbers.

There is no more difficult challenge in cycling. The Year is the definitive story of these phenomenal cyclists.

What listeners say about The Year

The Year is a fascinating account of the dedicated cyclists who each rode thousands of miles to attempt the mileage record in a year, a feat which has peaked at over 75,000 miles.

The book is rooted in the development of cycling as an endurance sport, with the popular mode of transport evolving into the desire to cover massive distances by bike in the nineteenth-century. The different circumstances of each of the “cycling mountaineers” are brought to life in this book, from the challenge of finding the time to ride enough miles alongside work and family life, to the problems of riding without sponsors or a support team.

As well as hearing about the different characters who attempted the year record, I particularly loved the insights into the recording and verification of the distances covered. This will very much appeal to those whose miles haven’t happened if they’re not on Strava.

You will enjoy listening to this audiobook if you have an interest in sporting achievements and their history, particularly if you like cycling and endurance sport. It will also appeal to those who enjoy social history topics, as it uncovers lots of interesting items from the archives around the record, such as women’s roles in sport and the impact of the World Wars.

having absolutely loved Daves last audio book this was eagerly anticipated. However, i found the narration monatone and not unlike the historical audio tracks fed through headphones whilst on museum tours. not for me im afraid