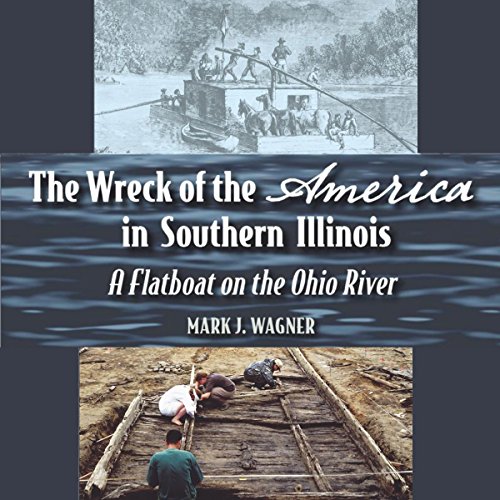 The Wreck of the America in Southern Illinois

By: Mark J. Wagner
Narrated by: Robert Diepenbrock
Try for $0.00

Flatboats were the most prolific type of vessel on the Ohio and Mississippi Rivers during the early 1800s. Thousands of these boats descended the two rivers each year, carrying not only valuable cargo to New Orleans but also western-bound emigrants to newly opened territories. By the late 1800s, flatboats had completely disappeared, and no intact examples were known to exist.

That changed in 2000, when local residents found a wreck on the Ohio River shoreline in Illinois. Archaeologist Mark J. Wagner and his colleagues from Southern Illinois University Carbondale investigated extensively and established that the wreck was a pre-Civil War flatboat, which they named America after a nearby town.

In The Wreck of the America in Southern Illinois: A Flatboat on the Ohio River, Wagner provides a brief description and general history of flatboats and the various reasons they wrecked - such as poor workmanship and encounters with pirates, storms, rocks, and floating trees. Wagner describes the remains of the America, how it was constructed, the artifacts found nearby and inside - including pewter spoons, utensils with bone handles, metal buttons, and an iron felling axe - and the probable cause of its sinking. Wagner concludes with a history of the America since its discovery in 2000.

"This book will become the source for helping to record other flatboat wrecks that will certainly appear." (Leslie C. Stewart-Abernathy, Station Archeologist, Arkansas Archeological Survey)
"Provides an informative history of flatboats, assessing their construction, purpose, and the many hazards faced by their crews." ( Missouri History Review)

In 2000 an old boat was found on the Ohio River shoreline in Illinois by local residents. Mark J. Wagner an archaeologist from Southern Illinois University at Carbondale and his colleagues investigated the wreck in 2002. They performed an intensive investigation and determined it was a pre-civil war flatboat. They named it America after a nearby town.
Wagner provides a detailed report of the field work performed including the construction of the boat to artifacts found in and near the wreck. Wagner also provides a possible cause for the wreck of the boat.

Wagner goes on to provide a history of the flatboats which, she says, was the most prolific type of vessel on the Ohio and Mississippi rivers in the early 1800s. The author says the flatboats disappeared from the rivers after the Civil War probably due to more steamboats and the advancing railroads. This is the only flatboat ever found on the rivers and they would like to preserve it and place it in a museum before the Ohio River destroys it completely but as with most historical items there is no money available. This book was published in 2015 by the Southern Illinois University Press.

The book is well written and easy to read. I have always found archaeology fascinating and enjoy reading about discoveries. I would love to go on a dig again; maybe someday that might happen. I was particularly interested in this book as I was at the Southern Illinois University campus in Carbondale this spring. Wish I had known about the boat, I would have gone to see it. This is a short book at about four hours.

Robert Diepenbrock does a good job narrating the book. Diepenbrock is an Emmy Award winning actor, director and audiobook narrator

An interesting listen for both academics and lay persons alike. Accounts of historical pirate characters lighten the detailed academic record.