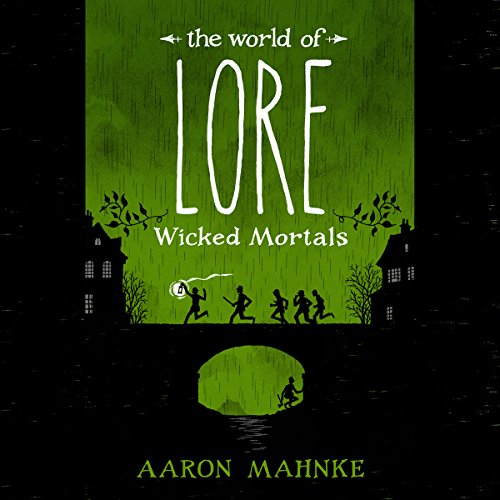 The World of Lore: Wicked Mortals

A chilling who’s who of the most despicable people ever to walk the earth, featuring stories from the Lore podcast - now a streaming television series - including "Black Stockings", "Half-Hanged", and "The Castle", as well as rare material.

Some monsters are figments of our imagination. Others are as real as flesh and blood: humans who may look like us, who may walk among us, often unnoticed, occasionally even admired - but whose evil deeds and secret lives, once revealed, mark them as something utterly wicked.

In this volume from the host of the hit podcast Lore, you’ll find tales of infamous characters whose veins ran with ice water and whose crimes remind us that truth can be more terrifying than fiction. Aaron Mahnke introduces us to William Brodie, a renowned Scottish cabinetmaker who used his professional expertise to prey on the citizens of Edinburgh and whose rampant criminality behind a veneer of social respectability inspired Robert Louis Stevenson’s classic novella Strange Case of Dr. Jekyll and Mr. Hyde.

Then there’s H. H. Holmes, a relentless and elusive con artist who became best known as the terror of Chicago’s 1893 World’s Fair when unwitting guests were welcomed into his “hotel” of horrors...never to be seen again. And no rogues’ gallery could leave out Bela Kiss, the Hungarian tinsmith with a taste for the occult and a collection of gasoline drums with women’s bodies inside.

Brimming with accounts of history’s most heinous real-life fiends, this riveting best-of-the-worst roundup will haunt your thoughts, chill your bones, and leave you wondering if there are mortal monsters lurking even closer than you think.

The World of Lore series includes:

What listeners say about The World of Lore: Wicked Mortals

Same as the Podcast

if you listen to the podcast, you've heard this whole book before. don't get me wrong, it's very good, but it's the podcast basically word for word

One of my new favorite arthurs

Love this author, his podcasts, books, and the amazon prime tv series!! I really hope he writes more books and creates more podcasts! I wish that he released more than one podcast episode at a time though!

was really great!! I enjoyed this book a whole lot, I was engaged the whole time.

I love lore. I love the podcast and now I love the books. Aaron Mahnke is a great storyteller.

Fun to listen to these stories of the strange and macabre. Always a joy to hear!

For Fans of The Lore Podcast

Akin to the first book in this Lore collection (Monstrous Creatures), this book covers many of the same topics that have been researched and broadcast on the titular podcast. This book goes further in-depth and covers various types of 'wicked mortals.' Think the likes of the serial killer H H Holmes, resurrectionists who amassed their wealth from body snatching the recently interred, or black widow types who systematically poisoned everyone around them (typically for insurance).

Chapter changes are marked with some music, but I miss having it ambiently play throughout as it does on the podcast.

While I love the lore, the primary reason I purchased this was in support of the author and his podcast. Aaron Mahnke is a wonderful story-teller, but most of the content here can be found on the podcast or on the Amazon Prime show.

I will likely get the upcoming Lore: Dreadful Places, but with the understanding that it, like the two books that have come before it, is going to be an in-depth retelling of the podcast.

I would highly recommend this to fans. And for those who have never heard of Mahnke or Lore, I suggest listening to his Lore podcast first so you can experience his reading and story-style.

I personally LOOOOVE the podcast!!!! And I this book was so chilling and thrilling. I was on the edge of me seat the whole time!!!!

You should read this book then go start listening to the podcast, you will not regret it!!!

redundant if you listen. to the podcast.
he should narrate horror books, if you haven't listened to the podcast then this will be good

Lore is my favorite podcast so I knew that I would enjoy the book series as well. Aaron Mahnke is the best narrator I’ve come across in both podcasts and ebooks.

My one suggestion to Lore listeners is that if you’ve listened to the podcasts, then most of the stories contained in this book will be familiar to you, so this may not be the book for you if you’re looking for brand new Lore content.