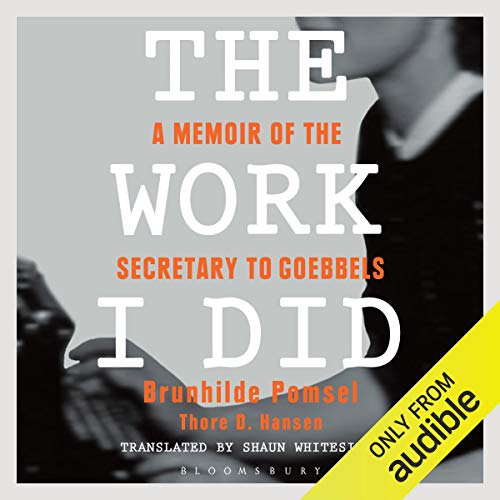 The Work I Did

Brunhilde Pomsel described herself as an 'apolitical girl' and a 'figure on the margins', but, employed as a stenographer during the Second World War, she worked closely with one of the worst criminals in world history: Nazi Propaganda Minister Joseph Goebbels. She was one of the oldest surviving eyewitnesses to the internal workings of the Nazi power apparatus until her death in 2017.

Her biography, however, not only provides us with extraordinary new insight into a seminal moment of history. Her life, mirroring all the major breaks and continuities of the 20th century, also illustrates how far-right politics, authoritarian regimes and dictatorships can rise and what part political apathy and passivity of the masses can contribute to democracy's erosion.

Compelling and unnerving, The Work I Did forces us to ask how we could have acted in such a situation and leads to the disturbing and enduring question: how reliable is our own moral compass?

What listeners say about The Work I Did

If you are hoping to gain insight about Dr. Goebbels from someone uniquely positioned to know, this is not the book you would expect. Rather than bemoan my purchase, I listened to the end, learning something fitting for our time in the process. It details her apathy, as well as our own, to not recognize populist movements with dangerous tendencies.

Stick to the story of the main character and stop with the liberal agenda. Both sides are lost and don’t care about people. Pomsas story is great the author is an idiot. Wish I could give it a zero

Brunhilde Pomsel's banal life's story working under Goellbells was wholly devoid of historical interest but did serve the author's intent as a vehicle to preach her "Diversity is Strength" ultra-leftist progressive worldviews. Like with Marxism, this progressive utopian view believes in the promise of bending human nature to its will. If WWII and other wars throughout history have taught us, this folly only serves to undermine peace...the very thing she wishes to instill.

The narrator did a heck of a good job, though.

The reason we need to keep history alive

I wasnt expecting the commentary or political analysis of Brunhilde's interview but it added so much. The questions posed but hard to answer are exactly why I bought this book and read about history at all - what can we learn? What do we need to take heed of? Do instead? And of course the curiosity about what you might do in such a situation. I feel ashamed at my lack of awareness and action today having read this and am determined to change now.

Two stories in one

If you could sum up The Work I Did in three words, what would they be?

The biography part of the book was good, giving an insight into the workings of the Propaganda Ministry.
However after Brunhilde's story finishes the book continues on with a rambling diatribe on how things are today. I took so much and stopped listening.