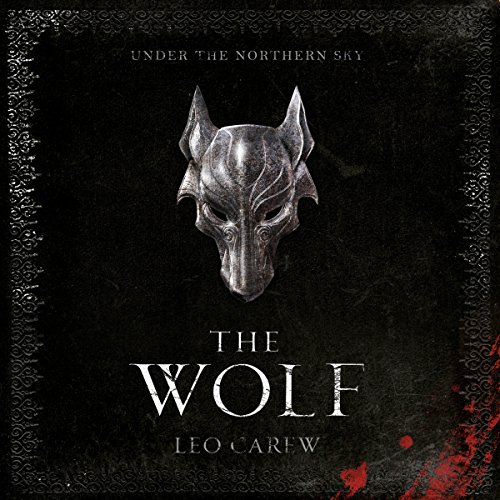 Leo Carew's debut novel, The Wolf, the first book in the Under the Northern Sky series, is a masterpiece in epic historical fantasy - a new voice to rival David Gemmell or George R. R. Martin.

By contrast, the Sutherners live in the moment, their vitality much more immediate and ephemeral than their Anakim neighbours. Fragile is the peace that has existed between these very different races - and that peace is shattered when the Suthern armies flood the lands to the north.

These two races revive their age-old hatred and fear of each other. Within the maelstrom of war, two leaders will rise to lead their people to victory. Only one will succeed.

The Wolf is a thrilling, savagely visceral, politically nuanced and unexpectedly wry exploration of power and identity - and how far one will go to defend them.

What listeners say about The Wolf

It had me addicted

I was recommended this book as the author is a friend of a friend, I wasn't expecting too much but thought it was worth the credit. As a fan of epic fantasy I found it captivating. After the first hour I couldn't stop listening, my productivity at work plummeted and relationships suffered 10/10 would do again

A brilliant tale, most excellently told.

It’s a travesty that this book has so few reviews. It captured me from the off and kept hold all the way through.

Apart from the excellent plot and characters, I really enjoyed the author’s take on the business of war.

I feel that Bernard Cornwell & Angus Donald aficionados would be well served by giving it a go.

I wasn't too sure about this book to start with.

However, it was quick to develop and I couldn't stop listening to it. I am really looking forward to the next book in the series.

As expected, it was superbly narrated by Matt Addis.

As Bernard Cornwell is my goto author for a good old dose of historical fiction (or as I call it: true fantasy) I was looking for something similar to his work but with a ‘new voice’ so to speak. In this book I was given a spoonful of exactly what I was seeking. Carew is an intelligent yet unpretentious writer who has adopted an anthropological concept which I have hitherto not yet come across in any other medieval fantasy. Two very different species have evolved from the primates and now each oppose the other for survival and vi for domination of Albion (obviously Britain). It’s a beautifully crafted story told from both sides and with enough bloody battles, devious females, and political intrigue to keep the narrative moving in an interesting direction. The characters act believably and the narrator expertly keeps the voices consistent and identifiable. I cannot wait to delve into the sequel. Well done!

Excellent start to a new mediaeval fantasy series. More focused on battles and less on intrigue, than say, A Game of Thrones, but worth your attention nevertheless.

I only deducted one star from the story rating as I felt the scheming and plotting at the opposing royal courts deserved more time, but perhaps that is to come in the subsequent books in the series.

The narrator is absolutely perfect for this book, doing a very good impression of heroic warriors in the middle of a battle.

The narration by Matt Addis is exceptional, the story is interesting and dark. I love the characters!!

do yourself a favour and get it!!

No words needed, 5 Stars are not enough!!
Brilliantly writen and brilliantly narrated. In a time that's not easy to surpass Game of Thrones, i think this author could boast and be proud of the achievement.
Congratulations !!!

The story started well, but quickly faded into tedium. it seemed like nothing really happened for most of the book. I almost gave up on it mid-story, but persevered to the end. Wish I'd just given up, the ending was weaker than the rest of the story. The narrator was ok, but not fantastic. I wont be bothering with the sequel.

I really enjoyed listening to this book. The premise was appealing but I could not believe just how much I would enjoy it. I would definitely reccomend if you are also a fan of the genre. I'm looking forward to the next instalment.

Should be fab but drags after a while

I read other reviews, it is my kind of thing but then I noticed i was rarely keen to get back to it. It plods along and the baddie is SO bad and the goodie is SO noble and...... I don't care. Overall the characterisation is shallow and the set pieces are clever and well-written but the SPARK is missing for me. I wanted to wolf this down (pun intended) and grab the next one but I am waiting for this to end in a probably magnificent set piece and it will be goodbye. Sorry, Leo Carew.

Couldn't stop listening to it

now usually im not someone who likes to read, well even listen to audio books. This is the one and only book where I started and I could not stop. It was getting to a point where I would even chuck it on during my cardio sessions! I could not recommend it enough.

a bit dragging in between !! for some it is fast forwarding!! otherthan that bloody good !!