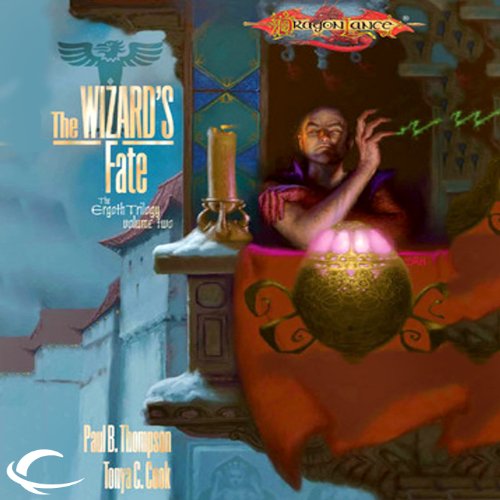 By: Paul B. Thompson,Tonya C. Cook
Narrated by: Dennis Holland
Try for $0.00

A warrior returns home to reclaim all he has lost.

After a bloody 10-year war, the mighty city of Tarsis has been brought to its knees. Lord Tolandruth - once the farmer's son Tol - has led the armies of the Ergoth Empire to the enemy's very gates. Poised for final victory, instead he is recalled to Daltigoth. The Emperor is dead, and civil war threatens to tear apart the empire.Tol takes a long, perilous journey back to the seat of power, not only to attend upon a new emperor and be reunited with the woman he loves, but to avenge himself on the wizard who caused his exile. Reclaiming his love and honor calls for sacrifices that will shape his destiny - and the future of Krynn.

Writing team Thompson & Cook once again explore the history of the ancient Dragonlance world in The Wizard's Fate, the next title in the Ergoth Trilogy. Considered the historical specialists of the Dragonlance world, the authors take the story to a colorful and violent era of its history that has not been previously chronicled in any novel.

What listeners say about The Wizard's Fate

loved it all the way through. every one of these books are amazing. just love em