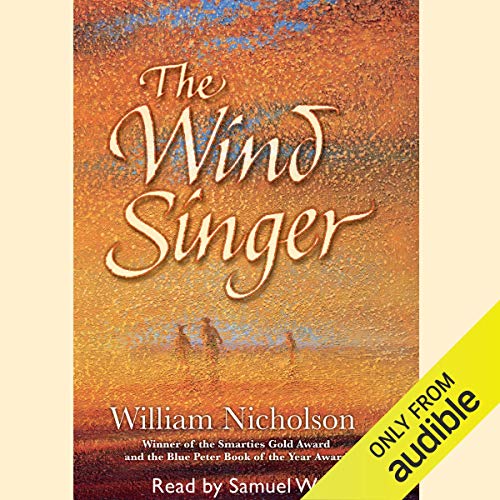 By: William Nicholson
Narrated by: Samuel West
Try for $0.00

In Aramanth, exams are everything. When Kestrel rebels, her family are sentenced to the harshest punishment. To save them, Kestrel learns the secret of the wind singer and she sets out to discover the true source of the evil that grips Aramanth.
©2001 William Nicholson (P)2014 Audible, Inc.

What listeners say about The Wind Singer

The Wind Singer is an amazing children's book that doesn't have to be just for children. It is emotional and unique, not a rehashed story that's already been told. It is a fantasy story, though I think it falls more in the realm of dystopic fiction, without the harsh, futuristicness that is so often encountered in that genre. I recommend this book to anyone who has ever enjoyed YA lit at any point in their lives.

I don't know what I expected when I picked up 'The Wind Singer'. I regret to say I was put off at the start by the tone, which seems aimed at children. After getting into it though, I warmed to it. This is a very solid adventure story, through a fantasy world that teaches lessons and ignites the imagination. In short, it's all you want out of a children's fantasy novel. It did feel perhaps a bit cut short at times, like the author was forced to cut a bit for the sake of the story, but it isn't incredibly noticable. Great book for an 8-12 year old, or an adult looking for a glimpse of childhood.

This book was my childhood. It was so different than every other story, I love it! Great writing and an awesome story. I enjoyed it also as an adult, but it's easy enough for any young or old reader to find thrilling.

Still my favorite a decade later

I first read this series in high school when I discovered the first book in our library. I loved it then, and reread the series dozens of times. Hearing this was a wonderful experience that brought back good memories of why I love these books so much. Wonderefully narrated. Thank you!

Well I guess this is why they give out the free trial because I will be using this app every day :)

most of the book is excellent

Unfortunately there were significant portions of the story that were too Alice in Wonderland for me. About a quarter of the book. The rest of the book really was excellent, which is why I made it to the end of the story.
The narration was excellent. I would definitely listen to Samuel West again .

It is a meaningful story with an adventure of variety. I read it in my youth and enjoyed it again as an audiobook.

A well-written fantasy/dystopia story for middle-grade readers. Samuel West is an excellent narrator. He interprets the story with wit and verve. All the characters, and there are many, are distinct and easy to recognize through his many subtle voice variations. Beautifully done.

I must admit I purchased this trilogy simply because Samuel West is a superb reader and his choice of novels hasn't let me down yet. And here's another great story, this time written with young teens in mind but absorbing for adults too. The Audible description doesn't make it sound that interesting but it's a highly imaginative tale of a city/civilisation under attack and of the girl & boy twins (Kestrel and Bowman) who set out to save their city and people. It's an adventure story with a strong mystical undercurrent. What I liked most was that each twist in the tale was unpredictable, particularly when the twins got themselves into Perils-of-Pauline situations.

Each of these books can be read as a stand-alone, but it's definitely worthwhile listening to them all in sequence (The Wind Singer; Slaves of The Mastery; Firesong) to find out what happens to all the different characters. Samuel West, as usual, does a brilliant job with his narration.

I hadnt read these books and came across a recommendation.
I simply adored them - buying Books 2 & 3 before I was half way through book 1 - and listened to them all one after the other.
Samuel West is brilliant - he has a wonderful voice and gave the story a perfect delivery.
Highly, highly recommended!

This story is clearly aimed at young people aged between perhaps 10 and 16. However, I, a 51 year-old, also enjoyed its innocent sense of adventure. The tale is set in the fantastical city of Aramanth, where all citizens are segregated by colour and district according to their intelligence and sense of obedience and duty, and controlled by examinations that test the intelligence and ability to learn of its subjects. Three children set out to bring release to the City from this restrictive set of Rules by restoring the voice of the wind singer, which is a music-making high tower in the middle of the square. They face a whole series of dangerous and fantastic adventures before they finally find the voice of the wind singer and (facing death several times over) restore it to the tower where the magical music restores happiness to Aramanth and it becomes like any other city in our world with people freely intermingling and not being restricted by exams or anything else.

I enjoyed the narration very much: the only reason I have deducted one star is because the man narrating it did not have a massive voice range (e.g. children's voices were not spoken in a higher pitch), but it was a very pleasing experience to listen to him anyway, as he carried the story on beautifully.

Another thing I enjoyed very much was that the story started at the beginning, carried on through the middle and ended at the end, which is unlike the modern trend of adult novels where time darts all over the place, using the voice of several different characters past and present, until you don't know whether you are on your head or your heels. I often get confused by this modern genre of moving back and forth in time, so for this reason alone it was a very refreshing change to listen to a book where time behaves in a proper manner!

this is one of the best audiobooks I have ever listened to. I was weeping with emotion several times during the book... suitable from aged 9 up I would say

Just as good as I remember with great delivery. not a good story for younger listeners.

Samuel West's performance made the book immersive and difficult to put down - just brilliant.

If you could sum up The Wind Singer in three words, what would they be?

brilliant for all ages

i first read this book in school and came across it the other day and decided to give it ago, it is truly brilliant and still facinates me today

I know this is classed as a YA book, but my 67 year old husband and 61 year old self really enjoyed listening to it on holiday. I think the main reason is because Samuel West is such a terrific narrator, and gives each character their own distinct voice. The story is well written and would , I think, appeal to all
ages. It is easy listening, I have bought the sequels and hope they are as good.

Thought-provoking. A great reading as well.

Relevant, well written and imaginative. One of those books that will engage 'old' and young readers alike.

A trip to an unbelievable society

I first read this book when it first came out as a teen, I fell in love with Bo and Kess even back then. All the characters are just so full of life and believable. It was a great read full of danger, chases, fights for freedom and a massive mystery as to who the Mora is and why Aramanth is the way it is. It is a series that I have read a few times. I found it again recently and instantly was transported back to the wonder of back then. It was a wonderful read that keeps you on the edge of your seat.