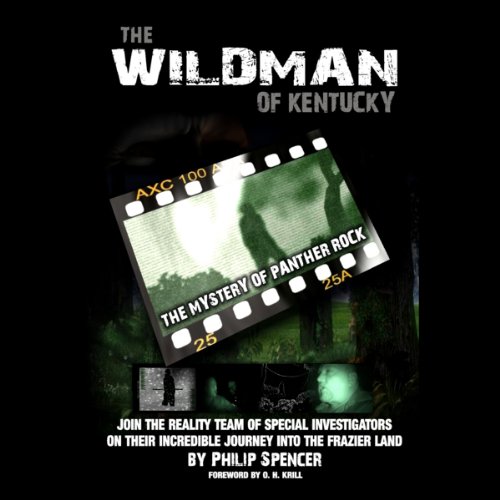 The Wildman of Kentucky

The Wildman of Kentucky

By: Philip Spencer
Narrated by: O. H. Krill
Free with a 30-day trial

There is probably no other unknown creature that arouses more curiosity than the Bigfoot or Sasquatch. Yes, there is the Loch Ness Monster, the Chupacabra and other great beasts, but the Bigfoot remains the most compelling as it pulls us toward ourselves, shadowing the unknown X factor of our very origins.

The case files contain thousands of reported sightings, yet no actual specimen has ever been found. Hundreds of photographs exist, but the creature has not been identified. Still, the clues accumulate year after year. In the words of one Bigfoot investigator, "It is an extremely complex phenomenon with no starting point and few geographical limits." If this creature does exist then it most certainly must be a relative of man. Species? Unknown at this time.

In the heart of Kentucky there is an ancient and sacred ground known as Panther Rock. For many years tales of strange events have been reported but never investigated in full. Now, for the first time an intrepid group of explorers ventures into the unknown to discover the truth.

Join the Reality Team of Special Investigators as they uncover new Bigfoot witnesses and historical tales. Journey with them into the dark woods of the Frazier Land and witness amazing paranormal and often terrifying events.

What listeners say about The Wildman of Kentucky

I'd rate it ZERO if I could! There's not much to say other than: HORRIBLE! The only explanation for this book even being available publicly is that the author knows someone at the top of the "food chain" or paid someone off. The only thing worse than the writing is the hideous, worse-than-amateurish heavy metal guitar playing that separates each chapter. Skip this unless you have an urge to hear THE WORST audible title by far!

Wildman of Kentucky not what it seems

This is the audio portion of one of those searching for bigfoot tv shows.
without the video that shows the dark night and the area where the searchers were working the audio is boring.