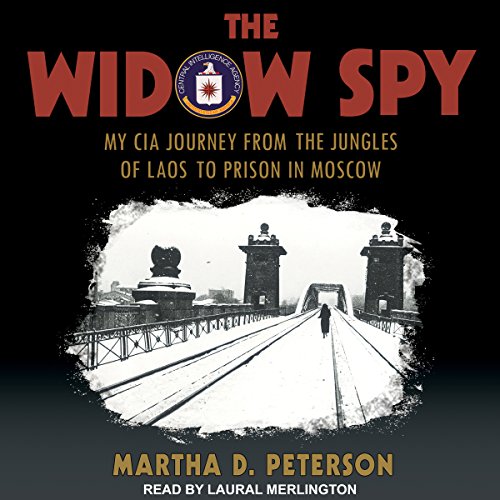 By: Martha D. Peterson
Narrated by: Laural Merlington
Try for $0.00

The Widow Spy is the firsthand account of a true Cold War spy operation in Moscow told exclusively by the CIA case officer who lived this experience. Martha D. Peterson was one of the first women to be assigned to Moscow, a very difficult operational environment.

Her story begins in Laos during the Vietnam War where she accompanied her husband, a CIA officer. She describes their life in a small city in Laos, ending with the tragic death of her husband. Then her own 30-year career begins in Moscow, where she walks the dark streets alone, placing dead-drops and escaping the relentless eye of the KGB.

Experience her arrest and detention in Lyubianka Prison, as only she can relate it. What she reveals in The Widow Spy has never been told.

What listeners say about The Widow Spy

For the most part, this story gives a fascinating glimpse at the daily life a CIA Case Officer, and the recruiting process. My only complaint is that the author spends a little too much time recounting the furniture and lay-out of her rooms and living spaces (seriously, this goes on for 10+ minutes several times throughout the book), which feels more like padding than interesting description. Otherwise, excellent, fun listen!

Don’t waste your credit or cash. Didn’t finish it though I tried!!!! First third has nothing to do with SPY, 2nd third was boring, never finished the last third.

I’m a big history buff and this ticked almost all of the boxes I have for an awesome story - the war in Southeast Asia, Cold War spy’s, USSR, and strong independent women. It’s also cool that it’s a TRUE story. The story flowed really well, there was never really a dull moment - I even feel like she could have given more details but maybe that’s just me.

The only “complaint” I have is of the narration. Overall such a good book! I wish it was turned into a tv series or movie, based strictly on facts, of course. I’d recommend this book to anyone even remotely interested.

Sounds like a robot is reading it! It is terrible to listen to because it’s obviously not a human reading.

I can’t give this book enough stars or say enough good about it. If you’re the least bit interested in the Cold War, or the CIA, or women in the intelligence community, this is a great book. Martha Peterson Had an amazing career, first in the jungles of Laos then as a covert operator in Moscow. It reads like suspenseful spy novel, only it’s real. Ms Petersons courage, intelligence, and service to our country are a challenge to us all. Her story had me on the edge of my seat. You will be glad you bought you will love it. Thank you for your amazing courage.

This a fair story and I realize the author and the CIA may have limited what she could publish. What does the S stood for.?

Martha Peterson is my shero!

I loved this book! I read a ton of books about the Cold War, including many memoirs of intel officers of their careers in the Cold War, but this was especially fascinating. Author was the first woman to be sent to Soviet Moscow as a case officer, a towering achievement and act of service both to our country and to American women for whom she charted a path in intelligence work. As an American woman who finds the topic fascinating amid the New Cold War between 🇺🇲 and 🇷🇺, I found myself cheering Peterson on throughout the exciting details of courageously executed operations. From start to finish I was in perpetual awe of the author, although she recounts her story in a "no big deal" sort of way. Read in a single sitting! Super riveting. Highly recommend.

But with some weird narration. Pronounces S/E Division as “Southeast Division” and at times it sounds like Siri is reading to you. Not ideal.

Rich in detail, satisfying and touching

I've read many such CIA agent autobiographies. This one may be my favorite among them all, with Dick Holm's being a close second. It is touching and full of unique details about Peterson's life in Moscow. My only regret : it left me wanting a bit more. Very good narration by Laural Merlington.

Really interesting account which conveyed a vivid sense of place and time. My only quibble is the narrator's habit of pronouncing CIA as C [pause] I [pause] A. Since 'CIA' is used constantly, this drove me slightly nuts. But I finished the book and I learned a lot.