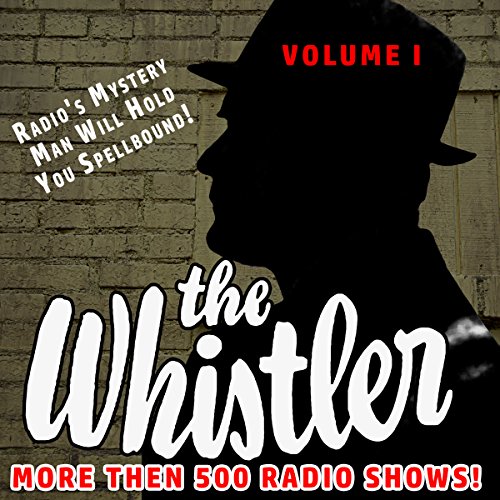 The Whistler was a radio mystery anthology that debuted on CBS Radio on May 16, 1942. The show was heard only on the West Coast and had Signal Oil as the main sponsor. There were attempts to broadcast the show on the East Coast, one in July to September 1946 and the other in March 1947 to September 1948, with Campbell Soup and Household Finance as the suggested sponsors.

The show centered on a character called The Whistler, the mysterious narrator of various murder stories. The role was given to popular radio announcer Bill Forman, although there were occasions where other personalities, like Marvin Miller, Bill Johnstone, Gale Gordon, Everett Clarke, and Joseph Kearns, took over.

Despite the show being broadcast on the West Coast only, The Whistler was able to become one of the most popular and longest-running crime mystery dramas. It ended on September 22, 1955.

Enjoy the most complete collection - more than 500 shows. This is volume one of three volumes.

Please note: This is an historical recording. The audio quality represents the technology of the time when it was produced.

What listeners say about The Whistler - More Than 500 Radio Shows!, Volume 1

Cracking radio series from the golden age of radio that my husband loves. Kept him quiet for hours. Worth every penny! On to the next series!

Beware the sting in the tail!

What made the experience of listening to The Whistler - More than 500 Radio Shows!, Volume 1 the most enjoyable?

I really enjoyed these old timey radio shows of murder, mystery and suspense! Their vintage sound and the 'Signal Oil' adverts all add to the period charm. They kind of remind me of 'Tales of the Unexpected' in tone.

It has to be the Whistler himself with his mocking tone and all-knowing manner. After all, he knows the shadows that lurk in the hearts and minds of men and women who have strayed from the path etc. etc.!!

Have you listened to any of Bill Forman’s other performances? How does this one compare?

I have not, but his taunting and goading of the guilty characters is excellent and his creepy laugh! The haunting theme tune is also great.

"Thought you were so clever, didn't you Marjorie? You thought no-one would ever find out... but you cannot escape THE WHISTLER!"