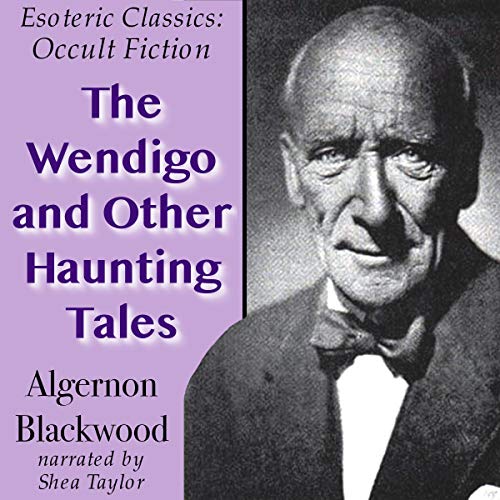 The Wendigo and Other Haunting Tales

By: Algernon Blackwood
Narrated by: Shea Taylor
Try for $0.00

British author Algernon Blackwood was a prolific writer who is usually remembered for his numerous ghost stories; however, he also wrote on many other supernatural themes and was an influence on many later writers, including H. P. Lovecraft. This collection of 13 stories includes: "The Wendigo", "The Olive", "The Goblin's Collection", "The Sea Fit", "Ancient Lights", "The Prayer", "The Wood of the Dead", "An Egyptian Hornet", "The Other Wing", "The Singular Death of Morton", "Entrance and Exit", "The Kit Bag", "The Damned".

What listeners say about The Wendigo and Other Haunting Tales

Blackwood was an original

It has been many years since I read any Blackwood, and I was in the mood for something classic and chilling so I tried this collection. Some of the stories are perhaps too old-fashioned for modern tastes, but each one shows Blackwood's originality.


1. THE WENDIGO is well known and quite long. It could be edited down for a more focused story.

2. In THE OLIVE, a young man picks up an olive a feminine diner dropped and finds himself transported to an otherworldly experience.

3. Dutton didn't have an excuse to decline a house party invitation, so he finds himself in a mansion inhabited by a kleptomaniacal Irish spirit in THE GOBLIN'S COLLECTION.

4. A small gathering of sailors are spending the Easter holiday together when one of them is taken by a SEA FIT which involves pagan deities.

5. ANCIENT LIGHTS is about a Croydon surveyor's clerk who travels to assist a client in Sussex, but he will have to find him first.

6. THE PRAYER centers on a psychical experiment performed by O'Malley and Jones, two medical students.

7. THE WOOD OF THE DEAD is set in the Devon and Somerset countryside in full summer. A visitor to an inn finds himself in the presence of an uninvited companion.

8. AN EGYPTIAN HORNET, "though black and yellow, sounds like scarlet," terrifies Reverend Milligan after an April morning's bath.

9. THE OTHER WING is a children's story. When Tim is tucked up in bed each night, and just after the fire dies down, a head-and-shoulders of a figure looks in at the door.

10. THE SINGULAR DEATH OF MORTON. In the limestone hills of the Jura, a couple of climbers make their way back to their lodgings when they hear a young lady walking behind them....again.

11. A physicist, a young lady, and her parson-fiancé discuss the disappearance of a man into a "haunted grove," leading to philosophical speculations in ENTRANCE AND EXIT.

12. A KC and his clerk congratulate themselves for successfully exonerating a client on the grounds of insanity. The clerk is planning an alpine sporting holiday and asks to borrow THE KIT BAG for his expedition.

13. THE DAMNED. A gentleman makes a visit, in company with his sister, to a friends mansion in the country. His only concern is that he be left in peace to write.

Blackwood was ahead of his time, rather strange, and quite original when compared to his contemporary story writers. If you like unusual, old-fashioned stories, you might like these, but it might be best to read a couple of stories before you buy. I believe most are in the public domain.

If this haunting hair raising literature genre entertains you, then Algernon Blackwood will scare you most suitably.
Shea Taylor is brilliant as the narrator.
He tells the story, he does not simply read it. Thank you everyone, for several hours of excellent entertainment.

When he says “Wendigo…”

The narrator is perfect for these stories. His rendition of the first in this compilation is memorable. I felt a chill like I was there.

Excellent performance of a few stories by one of my favorite authors (two longer ones framing a few short stories). Shea Taylor did very well and although I personally would have preferred them read by someone with a lower voice, I enjoyed listening to this reading in the end as the reader managed to bring out the atmosphere that is so important in Algernon Blackwood's writings and he made the speakers and actors become vividly real. Critique of the performance of "The Wendigo" I don't share, as this interpretation of Defago's distress is adequate and believable, while difficult to do by any reader. It would be minor even for those who don't like it, considering how well done this audiobook in general is. The only flaw for me was that the content only gives chapter numbers and no titles of stories, as if this was one novel. Maybe this could be fixed?! I thoroughly enjoyed this book.

I finally lost patience with the endless palaver and couldn’t even make it through “Wendigo.” The bombast was so scary, I just couldn’t stand it anymore and had to stop listening out of sheer fright. .Meanwhile the narrator makes both of the Canadian hunting guides in “Wendigo” speak with accents that are bad imitations of Texan or Tennessean English. Blackwood can’t be blamed for that—I hope! Someone needs to explain to the young Englishman narrator the difference between North and South, eh?

almost but not quite

what would be an excellent collection or at least a very good collection is ruined by the longest, main story the Windigo where the narration is interspersed with voices that are so annoying and so rivaling and inappropriate that there is no way to listen to the story the wind to go to not even be tried. As for the other stories 5 repeats of very commonly anthologized stories once again reduce the appeal of this collection where are the narration is generally quite good though even when it doesn't have the weird psychotic voice as in the wind ago it still does become quite boring as if the reader is not really paying attention to what he is reading

Good stuff :thoughtfull +imaginative. The top title :"The Wendigo" is a long short story, set in the Canadian wilderness at the end of the 19th cen, about a malign wind spirit. It is inspired by Indian myths. It's hard to over recommend it, in my estimation, as an outstanding example of the 'weird' /supernatural tale.

Really enjoyed all the shorter stories but the wendigo is read better by others.
Not to take away the narrators expertise he is excellent. The kit bag is very unsettling and scary.
A great collection of stories very well read.

These are absolutely splendid tales of mystery and the occult by a master storyteller, read by a person who simply cannot do accents. The default accent is Mangled Mummerset - Irish, Scottish, French - doesn't matter, it's all West Country faux-peasant. Combine with the curious vocal timing and it's a very strange listen.

Please do not hate me, but it is absolutely shocking that audible has still not mastered to organise and name their chapters. Are you just not bothered, while happy to take your costumers money or do you need to give a few tausend people a job to organise your files?
Please do!
It's a mistery why not more listeners complain and just take this major problem as granted. I did not review this quite good audible book just hoping someone will finally address this problem.

Although I was not so fond of some of the stories, they are, as a whole, strangely moving. I cannot entirely account for it: the story lines are not so strong, yet the reading usually had an effect on me. Taylor delivers the text extremely well. That helps, My guess is that Blackwood believes in the reality of the mysterious and this comes through (he was in the HMO and had a coherent view of the supernatural). For instance, the idea of the Wendigo is silly, and full of holes. Yet, it has made an impression on many people, myself included, probably because he conjures up an eerie picture and maintains it.