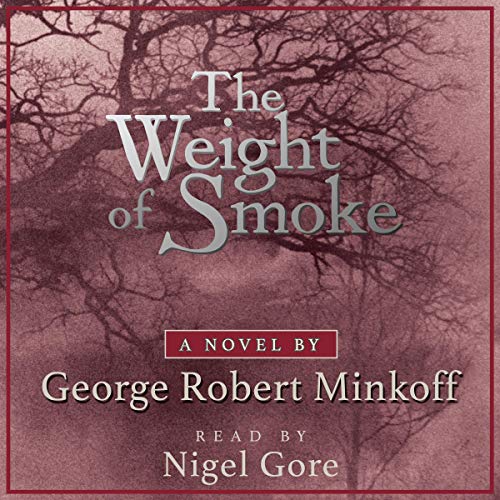 The Weight of Smoke

By: George Robert Minkoff
Narrated by: Nigel Gore
Try for $0.00

Four hundred years after the founding of Jamestown, the lives of Captain John Smith, Powhatan, and Pocahontas assume their true dimensions in this far-ranging saga of the beginnings of the British Empire. The English came to the New World to found a utopia. Instead they founded a slave state. The only English voice of reason and the first true American hero became an outcast - and then forgotten.

George Robert Minkoff presents a rich, authentic tale about the disastrous first 18 months of the Jamestown Colony, 1607-1609. Entwined with the colony’s fractious beginnings are the adventures of Sir Francis Drake, retold around the campfires by an old alchemist, Jonas Profit, who sailed the Spanish Main with Queen Elizabeth’s favorite pirate.

Appropriately, these tales are told in a language rich with metaphorical power, flavored with Elizabethan authenticity, and read with power and authenticity by Nigel Gore.

“George Minkoff is one of the bravest men alive. He has gambled that a three-part epic novel about 17th century Colonial America — written in a language that mimics the speech of the time — can hold the interest of 21st century readers and bring satisfactions and delights as a work of contemporary fiction. Remarkably enough, he has won his bet.” (Paul Auster)

“An excellent evocation of the beginnings of the Jamestown Colony. And, in a broader sense, it is a story of the Europeans encountering full-face the might of the American wilderness and the peoples who inhabited it.” (Larry McMurtry, Pulitzer Prize-winning author of Lonesome Dove)

What listeners say about The Weight of Smoke

The words of author George Minkoff writing in the Shakespearean style are pure pleasure ! Nigel Gore lifts the words off the page and takes the listener into an epic journey of America’s past that is a mesmerizing literary and theatrical experience. It is wonderful!

A Work of Brilliance

The Weight of Smoke is a work of such brilliance that it easily ranks with the greatest novels ever written. This is not hyperbole. It is simply an objective fact.