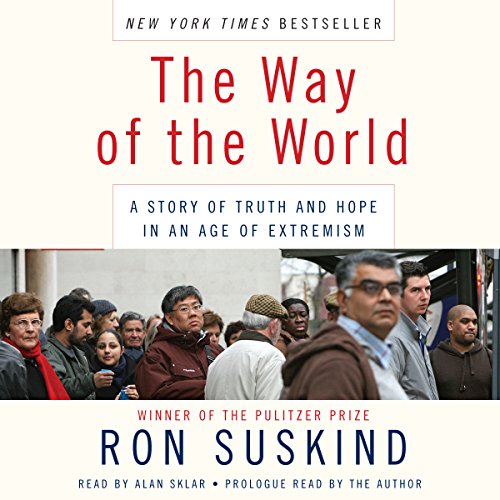 The Way of the World

The Way of the World

By: Ron Suskind
Narrated by: Alan Sklar
Free with a 30-day trial

From Pulitzer Prize-winning journalist and best-selling author Ron Suskind comes a startling look at how America lost its way and at the nation's struggle, day by day, to reclaim the moral authority upon which its survival depends. From the White House to Downing Street, from the fault-line countries of South Asia to the sands of Guantanamo, Suskind offers an astonishing story that connects world leaders to the forces waging today's shadow wars and to the next generation of global citizens. Tracking down truth and hope within the Beltway and far beyond it, Suskind delivers historic disclosures with this emotionally stirring and strikingly original portrait of the post-9/11 world.

In a sweeping, propulsive, and multilayered narrative, The Way of the World investigates how America relinquished the moral leadership it now desperately needs to fight the real threat of our era: a nuclear weapon in the hands of terrorists. Truth, justice, and accountability become more than mere words in this story. Suskind shows where the most neglected dangers lie in the story of "The Armageddon Test" - a desperate gamble to send undercover teams into the world's nuclear black market to frustrate the efforts of terrorists trying to procure weapons-grade uranium. In the end, he finally reveals for the first time the explosive falsehood underlying the Iraq War and the entire Bush presidency.

While the public and political realms struggle, The Way of the World simultaneously follows an ensemble of characters in America and abroad who are turning fear and frustration into a desperate - and often daring - brand of human salvation.

For anyone hoping to exercise truly informed consent and begin the process of restoring the values and hope - along with the moral clarity and earned optimism - at the heart of the American tradition, The Way of the World is a must-listen.

What listeners say about The Way of the World

Another monumental work by Suskind, The Way of the World is essential reading for anyone interested in understanding how to win the so-called "war on terror", and why so far we are losing. Although the talk show circuit has focused on the book's new revelations of the Bush administration's use of deception in instigating the war in Iraq (including illegally ordering the CIA to forge documents to deceive the American public), it will be remembered for its insightful exploration of America's real strength: our democratic values of inclusiveness, equality, free speech, and dialog. In a series of interwoven personal narratives, Suskind gives us an intimate look at key moments when good deeds by individual Americans helped change the way their Muslim friends viewed America and the world. Similarly, the book shows moments when our Muslim interlocutors have helped Americans better understand how to live up to our democratic ideals. Many books detail the errors and excesses of the "war on terror." This book alone speaks movingly and convincingly of the way forward.

information not easily found elsewhere - stories giving a large overview on the so-called "war on terror"- like a political thriller in parts - human interest story in others along with completely shocking information...

I was initially interested in Suskind's "Way of the World" because of the latest revelation of Bush/Cheney skullduggery - the forged letter verifying Al Queda's link with Saddam Hussein. However, the book is much more than an argument for impeachment. Suskind documents how Bush/Cheney administration has alienated the U.S. from the rest of the world, and how that has made it more likely for a terrorist nuclear attack.

As importantly, Suskind also provides stories of hope - about people who are working to genuinely reduce the threat of a nuclear attack as well as people who discover that their common humanity transcends the religious and political differences between the Islamic world and America.

The book is very well-written and excellently narrated.

Would you try another book from Ron Suskind and/or Alan Sklar?

I have read a book by Ron suskind, "A Hope in the Unseen," and I loved it! This is why I purchased this book, but I just couldn't get into it. It seems interconnected yet disparate enough to be confusing and almost sloppy, not aided by the narrator (of whom I have discovered I am not a fan).

Would you be willing to try another book from Ron Suskind? Why or why not?

Most definitely! he excels in putting into words compelling personal stories, such as that in A Hope in the Unseen, and I greatly anticipate reading "Life Animated" (about his family coping with his son's autism spectrum diagnosis). This book seemed a bit too ambitious, trying to be hard-hitting yet personal, and only moderately succeeding at both.

I have already recommended this to friends. Suskind talks about the post-911 world through the eyes of history as well as through the eyes of several individuals, which really hooks you into the story. At first it seems there's an anti-Bush-Cheney agenda going down here (even for a non-fan), which may turn off some Fox News fanatics. In the end, it is a story that reaffirms the strength of the American democratic culture and a system that allows us to question the efficacy of our actions and the motivations behind them.

I heard the author on an interview with Amy Goodman and thought his book sounded good. The first half went pretty quickly, but then I found myself taking at least another week or two to finish it. There was something missing in this book, but I can't quite place it. It was good enough to recommend, but not good enough to read twice.

Mr. Suskind really nails the reason(s) why Americans are so hated in the world. A perfect example is how the Denver, CO American "mom" of the Afghan exchange student hates Bush for trying to democratize the world at the point of a gun yet seems intent on turning her Muslim exchange student into a typical, feminized American male. What a train wreck! No wonder we have problems with other cultures!

Too bad Suskind reads only the introduction. I had to stop listening two and half hours into the book, as this narrator's breathy and needlessly melodramatic delivery was driving me nuts.