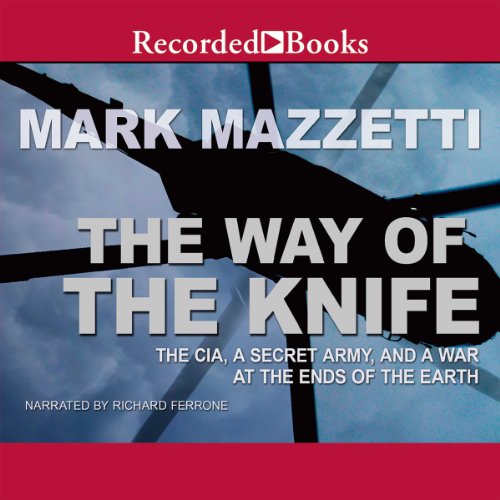 The Way of the Knife

By: Mark Mazzetti
Narrated by: Richard Ferrone
Try for $0.00

Pulitzer Prize winner Mark Mazzetti examines secret wars over the past decade, tracking key characters from the intelligence and military communities across the world. Among the characters we meet in The Way of the Knife are a young CIA officer dropped into the tribal areas to learn the hard way how the spy games in Pakistan are played; an Air Force test pilot who fired the first drone missile in the Nevada desert; a chain-smoking Pentagon official who ran an off-the-books spying operation in Afghanistan and Pakistan; and a woman from the Virginia horse country who became obsessed with Somalia and convinced the Pentagon to hire her to gather intelligence about al Qaeda operatives there.

Gripping, newsbreaking, and powerfully told, The Way of the Knife reveals the true nature of American warfare in the 21st century—a model that is here to stay.

What listeners say about The Way of the Knife

This book does a fine job laying-bear the drawbacks of an increasingly militarized CIA and increasingly covert DoD. It also examines the misadventures of using private contractors to do the US government's dirty work, and of becoming involved with unsavory groups or states to achieve short-term goals, which will have long-term negative consequences.

The chronology of the book is sometimes a bit jarring. In a few places it jumps forward or backwards in time suddenly. I think the editing could have been better from a continuity and cohesiveness standpoint. The book also suffers from a little bit of tunnel-vision--it follows the arc of several figures, but doesn't (in my opinion) give a broad assessment or characterization of programs overall. That's understandable, due to the difficulty of getting on-the-record statements from people involved in covert action and the intelligence world, but it does restrict the completeness.

This is an interesting book about shifts in policy in the military and the intelligence services involved in the war on terror from about 2001 onwards. (Some of the material actually pre-dates 9/11.) If the subject matter interests you then you will probably find the book to be worth a credit. Shortcomings of the work include the way the author jumps around temporally and the overly-dramatic reading by the narrator.

i couldn't wait for my 80 mile commute to and from work. i was completely absorbed by this book.

I liked this book and the reader so much I have listened to it twice and anticipate a third time soon.

The author was able to capture the ongoing problems between DoD and the Intel agencies as well as the problems and fights within each agency. Having been there I understand those battles very well.

I also think that the author did very well in relating both success, and there many, and failures.

I highly recommend this book to anyone who is a fan of the topic covered.

Telling us what the government and media won't.

At first I was a little unsure about downloading this book. I did not want an agenda driven, right or left driven story. I wanted truth and facts and I think I got what I was looking for.

The World is a complicated place

Bottom line: I enjoyed it. I’ll probably listen again. I feel very fortunate to live in America and wish that more people agreed that there is a responsibility to hold Electeds accountable to be truthful about their intentions for how America maintains the preeminent position of power in the global dynamic. I don’t have a problem with the CIA, I have a problem with the CIA having producing the own intelligence to support an outcome that is not observed in reality.

The foundational structure on which the subject matter is presented is the cycle the CIA goes through of paramilitary field success, hubris, failure, political scapegoating, risk aversion, institutional competition, paramilitary resurgence.

I wonder what the narrative would connote if the narrator was female? The performance is akin to some Clancy fiction, but the grim reality is caricatured by the masculine husky waspy voice.

accurate and sometimes scary. it is so important to know the resources we used over the years and sometimes reality stranger than fiction

lots of opinion here vice fact. but, well laid out and readable. don't take it all for face value!

Richard Ferrone has an excellent voice and I enjoyed hearing Mark Mazzetti’s words through him. The book was very thorough on setting up the background for the various characters so the multitude of plots could be understood better. I came away with a greater understanding of the US involvement across the globe over time.