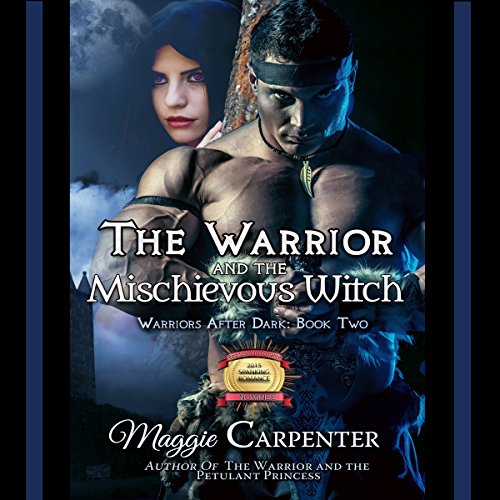 The Warrior and the Mischievous Witch

By: Maggie Carpenter
Narrated by: Rob Groves
Try for $0.00

Angelica, an impish witch, tangles with a warrior immune to her power, a warrior who suffers no qualms in putting her over his knee when he discovers she has attempted to put a spell on him. In spite of the stinging chastisement, she finds herself deeply attracted to the mighty warrior.

His name is Darius Dunworthy. An evil menace is terrifying the citizens of Zanderone, and he has been sent to find her in the hope that her magic can help.

She agrees to return with him to the Kingdom, but will Darius be able to control her on their journey, and can her sorcery save the frightened people from the evil that lurks in the shadows?

Note: Written as a stand-alone book, this is a sequel to The Warrior and the Petulant Princess.

What listeners say about The Warrior and the Mischievous Witch

Story was ok, but narration was horrible!

If it wasn't for the fact that I really wanted to check out this story, I would have stopped listening & returned it, during the 1st chapter! The narration was terrible! For a male narrator, he managed to make the warriors sound feminine most of the time! I wasn't sure if he was getting confused in character or if, it was just his narration! Plus he didn't read it with that natural flow.... It was very armature, like a kindergarten teacher reading a pornagraphic story to his class! It is hard to put up with! Unfortunately I'm not a quitter! Plus the story starts off pretty slow. Mid way through & the only good part of the story is the intrigue that gets wrapped up fairly quick... But by the time it's wrapped up you only have about 6 chapters left...also 1 more thing I ABSOLUTELY HATED was how weak & despite the h was especially in the beginning of the story!!!! She literally tries to cast a spell on the H to make him WANT her... And of course it doesn't work....what kind of woman w/ any self respect acts that way! If a man doesn't want you, make him see his loss in other ways! Don't force yourself on him! How demeaning!

We all need to escape from reality occasionally and this well narrated novel fits the bill. Go back in time to Princesses, Witches & Warriors.

rOur story finds us with the titled character " The Mirschievous Witch." She is definitely not your stereotypical witch. She's young, kind hearted, attractive though she's not aware of it and has a special bond with animals, primarily her exquisite horse Spririt.

We follow her story with the Warrior of the 1st order, Darrius and how their relationship evolves from working together to love especially since Darrius is such a by the rules Warrior & Angelica, our witch is free spirited. They compliment each other. He'll provide her with guidance & discipline when necessary. She'll make him laugh and enjoy lighter moments. He feels how she enriches his life

Each opens the others eyes of their value and growth as they battle evil & fall in love.

The narration enhances the novel with just the right amount gentleness & lightness.

I would whole heartedly recommend this enjoyable listening escape.

The Warrior and the Mischievous Witch

This story by Maggie Carpenter was a good choice. I enjoyed the audiobook immensely. I hope you'll listen too.

I really enjoyed this book. It was filled with so much drama. It made me laugh in some parts. Maggie I love your books. I can’t wait to listen or read more of your books. I really love your narrator Rob.

The Warrior and the Mischievous Witch was a fun story. I had difficulty with the narration of Darius’ character, but once I got into the story I was able to ignore it most of the time. The narration of the other characters did not bother me.

If this book had a different narrator IT WOULD BE PERFECT.
The author does a masterful job with the story-line and makes it so fun to read. She is truly gifted in posing the scenarios that one might imagine with a mischievous witch. I AM TOTALLY HOOKED ON MAGGIE CARPENTER.

I asked to receive this Audible book and voluntarily wrote this unbiased review. Once again Maggie Carpenter has written a  captivating story about a magical world of warriors and their mates. Darius is a dominant warrior who meets Angelica a witch. Angelica is use to getting her way but meets her match with Darius. She wants to be loved but will she be able to accept his strict disciplinary methods? Maggie creates a world full of adventure,  an evil villian, warriors that fight to protect their world and women, women that love their men, hot sexual love scenes, and of course discipline in the form of spankings. The narrator does an outstanding job of bringing this story to life. He has such an easy voice to listen to.

This was an adorable fantasy romance, with a very unique villain. The female lead was very funny.