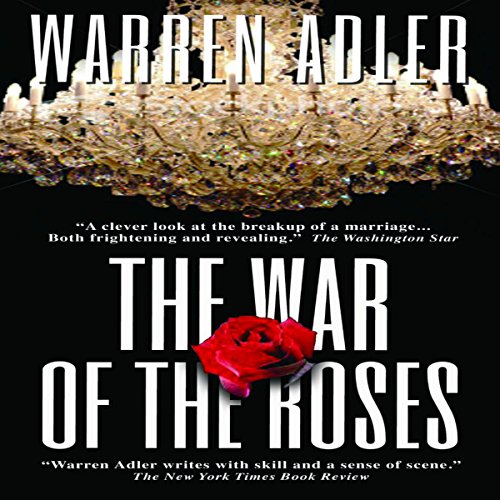 The War of the Roses

By: Warren Adler
Narrated by: Dave Giorgio
Try for $0.00

The Roses met at an auction on Cape Cod. Oliver had just bought a Staffordshire figurine - one of a pair - but Barbara outbid him for its mate. The figurines belonged together, and so did the Roses. Now the two objets d'art sat together on a shelf in the Roses' home - symbols of the passion their owners shared. A passion that united them and now was about to tear them apart.

Sharing, for Oliver and Barbara Rose, was a way of life. Living in the mansion they had restored together, with the antiques they had collected together, their rare wines, their orchids, and their children - all the beautiful things they owned - they were happy. Their latest project had been the kitchen, which was to be the core of Barbara's new-found career as a caterer of gourmet foods. Though Oliver was a busy and successful attorney, he had shared all the planning chores with her.

The tipping point occurred when Oliver collapsed with what seemed to be a heart attack, and Barbara, as he had expected, did not rush to his side. Her indifference to his fate was both galling and an eye-opener about the truth of their marriage, a truth based more on materialism than mutual sharing and love.

The War of the Roses is a timeless novel. Yet, this is a story uniquely of our own time, where more and more people measure their happiness and success in terms of the things they possess.

This is the book that inspired one of the most famous movies about divorce ever produced. Shown somewhere in the world every week, the movie is an excellent adaptation of the book that has been translated in almost every language on the planet. The impact of both the book and the movie have made them both classics and brought the title The War of the Roses into the accepted jargon of divorce, describing the terrible hatred and cruelty engendered in the process.

What listeners say about The War of the Roses

The movie made more sense

Would you listen to The War of the Roses again? Why?

Which character – as performed by Dave Giorgio – was your favorite?

Oliver, although I would have not gone down that path he did but I can understand why he did it. There was definitely the feeling of how angry he was because he worked so hard for what he have.

I remembered watching the movie and wondered how awful it was when two people in love fall apart like that. My aunt went through a really bitter divorce and that was how I related to the movie. I was excited when Audiobook Boom had the book to review, I couldn’t wait to listen to it. But because I love the movie so much that listening to the story pale in comparison. Sadly, I felt that the characters were not as interesting as the movie was. Kathleen Turner and Michael Douglas was a perfect cast and made the movie. There were slightly more details in the book but it didn’t really matter because there wasn’t anything that you couldn’t derive from the movie. Overall it was a good read.

wow one crazy ride, between love and hate!

I loved this movie when to first came out, I had no idea it was based off a book.
The book is different then the movie, but just as good! they cut a lot out on the movie. The book explains things in more depth. it lets you follow along as Mr and Mrs Rose slowly go insane trying to toucher each other to make the other one leave the house. how love can turn to hate so fast! the poor family and kids.
I was gratefully provided this audiobook at no charge by the author, publisher and/or narrator for an unbiased review via Audio Boom..

Here's a rare exception to the rule of the book is always better than the movie! This is the source of the Kathleen Turner and Michael Douglas movie from the 1980s. The movie--a black comedy--is pretty good; the book is middling at best. The movie establishes its tone and carries it throughout, while the book sometimes seems to take itself seriously and sometimes seems to be a comedy. Also, the author takes the story of a nasty divorce and pretends to take a "both sides at fault" stance, but the wife is clearly the villian. No one could truly sympathize with this lady, no matter how feminist! She twice tries to kill the husband and does kill his dog. The husband puts dexadrine in the wife's valium and scares off someone who accidently runs over the wife's cat. And this is a balanced view of a divorce?

Also, the reader is not a winner. While he is enthusiastic and speaks and emotes clearly, his vocabulary is not up to some of the fairly simple language used, resulting in some jarring mispronounciations!

I would not buy again.

So boring to listen to.. Everyone you think something will happen it doesn't or is played down.
Hope the movie is better

Love is ever expanding and unending

Would you consider the audio edition of The War of the Roses to be better than the print version?

I loved the narration and the plot and everything. It made for an excellent listen. Love and human nature propel individuals into a fascinating realm in this breathtaking timeless novel.

The War of the Roses

What did you love best about The War of the Roses?

I loved the best the telling of a "love" story that wasn't really about love at all. I don't know if either of them were really in love with each other or just what the other person could do for them

What was one of the most memorable moments of The War of the Roses?

Have you listened to any of Dave Giorgio’s other performances before? How does this one compare?

I haven't but he did good

I can't say that there was since i didn't really feel love between them, just mutual using of each other so the nastiness that ensued during their divorce didn't surprise me at all

The death of a relationship

Definitely a case of the book is better than the movie. A really interesting look into human nature and the death of a relationship. Warren Adler really hit the mark with this gem.

The narrator did a really good job. Great performance.

I loved the movie, but the book is sooooo much better

This is one of the best books that I have ever read. I loved the movie but in comparison the book is so much better. You really feel like you get inside of the minds of Barbara and Oliver Rose. I really enjoyed the addition of the au pair I felt like it added another layer to the story. The narration was wonderful. If you are on the fence about getting this book because of the movie do yourself a favor and get the book you will love it. I was provided this novel at no expense to myself for an honest review

My ex hated the movie. I liked the audio book

I would. This fleshes out the characters and what drives them far more so than the movie. Presents them as more real, more human.

Having seen the movie many years ago before my own divorce just about ten years ago, I can relate to the pain and feelings of not really knowing the other person that you built lives together with. It's poignant, funny, sad at the same time.

The moment Oliver realizes his marriage isn't as strong as he believed.

Both. There are moments of personally relating to what's going on. And comparing what actions the characters take to what transpired for myself

I enjoyed this more than the movie.

Interesting, although inferior to the movie

As a fan of the film, I was interested to read the source material. Although entertaining, however, I do think that this is one of the rare cases where the film is significantly better than the novel. Scenes between both versions run essentially parallel to each other, but were altered for the movie version to be better-thought-out, funnier and more believable. If you're looking for a light comedy, the book does have a thread of dark humour, but is ultimately much more cynical and unrelenting about relationships, gender roles, and materialism - almost to the point of being more depressing than amusing.

Having said that, I'm still glad I read it, and found seeing how the story had been altered for the film interesting.