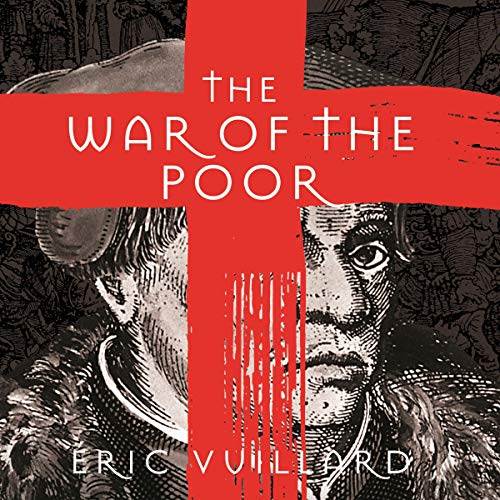 The War of the Poor

Shortlisted for the International Booker Prize 2021

The fight for equality begins in the streets.

From the internationally bestselling author of The Order of the Day: Éric Vuillard once again takes us behind the scenes at a moment when history was being written.

The history of inequality is a long and terrible one. And it’s not over yet. Short, sharp and devastating, The War of the Poor tells the story of a brutal episode from history, not as well known as tales of other popular uprisings, but one that deserves to be told.

Sixteenth-century Europe: the Protestant Reformation takes on the powerful and the privileged. Peasants, the poor living in towns, who are still being promised that equality will be granted to them in heaven, begin to ask themselves: and why not equality now, here on earth?

There follows a violent struggle. Out of this chaos steps Thomas Müntzer: a complex and controversial figure, who sided with neither Martin Luther, nor the Roman Catholic Church. Müntzer addressed the poor directly, encouraging them to ask why a God who apparently loved the poor seemed to be on the side of the rich.

Éric Vuillard tells the story of one man whose terrible and novelesque life casts light on the times in which he lived – a moment when Europe was in flux. As in his blistering look at the build-up to World War II, The Order of the Day, Vuillard 'leaves nothing sleeping in the shadows' (L'OBS).

"A dazzling piece of historical re-imagining and a revolutionary sermon, a furious denunciation of inequality." (The judges of the International Booker prize)

What listeners say about The War of the Poor

Not interesting at all.

Not interesting at all.

I anticipated learning about an obscure period of history and its parallels with today’s world. I was disappointed. The style of writing and indeed the reading made it not enjoyable to listen to. I learnt nothing in the first three chapters and I gave up.

The book is very nice and the narrator makes it even better. I really enjoyed it

Well read, but what is it?

The reading is fine here but it's a very short title and sits uncomfortably in a generic space between a popular history essay, historical fiction, and wannabe Sebald. But at the level of the audio here, recommended at least.

This is obviously way above my pay grade. I'm interested in the period and enjoy both history and historical fiction, but this genre-busting book is a bit of a puzzle to me. History? Hist-fic? Or a philosophical musing on poverty and power? And who is the 'I' of the narrative. Is there an omniscient narrator? Or is it the voice of the author? I don't know. (I don't mean the Audible narrator; I know who he is and he's quite good!) This is a quick listen, so I may give it another go and hope to delve into its richness with rather more success.

I was expecting a story

This book was just like reading a piece from an educational book. Where's the story ? Did I miss something? Quite disappointed
considering the author's first book was a masterpiece.