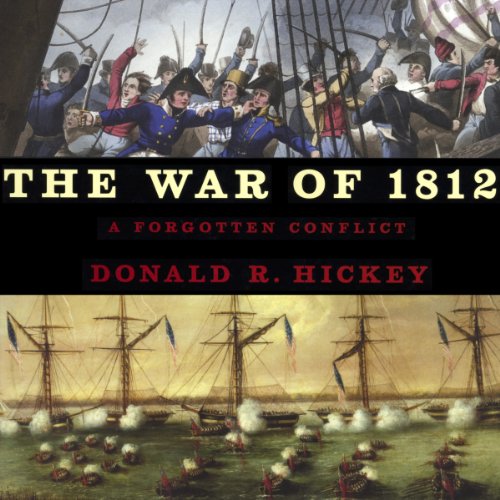 This comprehensive and authoritative history of the War of 1812, thoroughly revised for the 200th anniversary of the historic conflict, is a myth-shattering study that will inform and entertain students, historians, and general listeners alike.

Donald R. Hickey explores the military, diplomatic, and domestic history of our second war with Great Britain, bringing the study up to date with recent scholarship on all aspects of the war, from the Gulf of Mexico to Canada. The newly expanded The War of 1812: A Forgotten Conflict, Bicentennial Edition includes additional information on the British forces, American Indians, and military operations - such as the importance of logistics and the use and capabilities of weaponry.

"A well-researched and extensively documented overview of the causes and consequences of the War of 1812. Highly recommended as an inclusive political, military, and social treatment of a customarily neglected war." ( American Library Association Booklist)
"Despite being forgotten and overlooked, the War of 1812 was a significant milestone in the development of the United States... there is no better place to start than with The War of 1812." ( Civil War News)
"The definitive study." ( Journal of American History)

What listeners say about The War of 1812

The subject matter was very interesting and the author has accumulated a tremendous amount of previously unknown information. To this he adds great insight acquired through his studies. However, the dryness of the presentation detracted greatly from my enjoyment. This was partly due to the manuscript itself, but was exacerbated by the reader's presentation style. It was at times painful to listen to, but as I was interested in the subject, perseverance ultimately got me through it.

The book was not in a narrative form. But it was well researched., but choppy at times. The chapter on the Baltimore Riots, was new to me, and well done. As for the narration, Mr. Pratt at times read a little to fast, but overall it was good

The War of 1812 fascinating listening

If you could sum up The War of 1812 in three words, what would they be?

It ended before the last battle
If England was not fighting Napoleon, we might all be speaking English now

When the troop went over the niagra in barrels

Cried because I couldnt sleep

It's really an excellent book

This audio book does a great job of taking records 'with a grain of salt' and trying to give an unbiased and accurate explanation of the war of 1812. The vocalist reading sometimes sounds like recording this is the last thing in the world he wants to do, he will have no emotion in his voice and give no inflection to words. Occasionally he will read with very little pause between words, sentences or paragraphs so he will be ending a chapter and reading the title of the next chapter, but it sounds like one big long sentence because he will read the words dead pan and without pause so it sounds like one giant sentence. It was still a great book, I certainly recommend it.

Generally easy to follow and well performed except for some annoying mispronunciations. Arrogantly American at times especially the pronouncement that the Americans were the most profoundly affected by the War, so much so that they hardly remember it! Well researched though so no real complaints. Good to have another perspective.

The reader/presenter of the book reads it like a college professor. No emotion or a change in tone. Sort of like the ghost who taught history in the Harry Potter Books!

I didn't like the reader. I thought the content was interesting, but it was hard to listen to this book.

Too detailed for an audio book

Cut out all the weights, measures and exchange rates and this would be a much better audio book. The reading also seemed rushed.

I love history and was looking forward to learning more about this conflict. I did learn, but it was arduous. The book is broken down into far too many sections and subsections, making reading sometimes confusing and disjointed.
Furthermore, I listened to the audible version and the reader was awful. I lost count of how many words he mispronounced, which is unacceptable.

I️ was looking forward to listening to this audiobook about the War of 1812, having just devoured biographies on Washington (by Chernow), Jefferson (by Meacham), and the founding fathers (Ellis). But this proved to be a lackluster history, opting for a recitation of facts with little authorial analysis.

Moreover, the narrator doesn’t bring much drama or understanding, and the passages so are read so tightly together that scarcely does one chapter or passage end then another begins with hardly a breath in between.

Finally, the author focuses on economics and acts of Congress, with none of the color, context, or drama that animates the best popular histories. Yet it clearly is meant as a popular (as opposed to scholarly) text, for a general reader or student.

I️ did learn quite a few historical facts, but found the text bogged down by this recitation. Guess we’ll have to wait for Chernow to do a book on Madison (and then one on Monroe, then John Quincy Adams, then Jackson... please save us, Ron Chernow...).