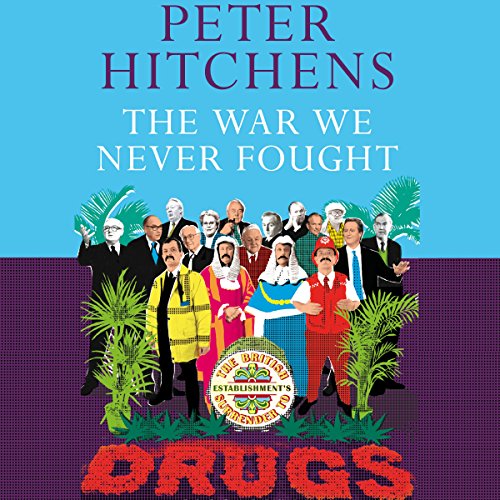 The War We Never Fought

The War We Never Fought

Again and again British politicians, commentators, and celebrities intone that "the war on drugs has failed". They then say this is an argument for abandoning all attempts to reduce drug use through the criminal law. Peter Hitchens shows that in Britain, there has been no serious war on drugs since 1971, when a Tory government adopted a Labour plan to implement the revolutionary Wootton report. This gave cannabis, the most widely used illegal substance, a special legal status as a supposedly "soft" drug (in fact, Hitchens argues, it is at least as dangerous as heroin and cocaine because of the threat it poses to mental health). It began a progressive reduction of penalties for possession and effectively disarmed the police. This process still continues behind a screen of falsely tough rhetoric from politicians.

Far from there being a war on drugs, there has been a covert surrender to drugs, concealed behind an official obeisance to international treaty obligations. For all intents and purposes, cannabis is legal in Britain, and other major drugs are not far behind. In The War We Never Fought, Hitchens uncovers the secret history of the government's true attitude and the increasing recruitment of the police and courts to covert decriminalization initiatives and contrasts it with the rhetoric. Whatever and whoever is to blame for the undoubted mess of Britain's drug policy, it is not prohibition or a war on drugs, for neither exists.

Great book again from PH, very insightful and eye opening. His views really make you think about the drug policies of the UK and have made me think to re-evaluate my views on them. Points out the propaganda used to normalise drugs that's hard to see in normal life.

An excellent book that informs and persuades the listener. Very compelling arguments but Peter isn't unaware of the counter arguments to his point of view. But he does a really good job of reasoning why they're wrong. A man a principal. So worth a listen.

A sneering pompous rant about the current state of ‘Protestant civilisation’. This book sounds like it was written in the 1930s; for example, the linking of rock n roll music with the rise of drug use. Many of the points regarding mental health and the impacts of individual drugs are strikingly ill-informed and appear to be the result only of condescending snobbery; references to the ‘uneducated’ are abound and it is insinuated that the homeless are no more than a work-shy bunch who lack discipline - ignoring the many complex reasons for homelessness. At every turn I was left jaw-dropped by the backward attitudes and oversimplification espoused.

Hitchens eloquently dismantles the legalisation arguments with customary erudition. You won't hear these arguments very often these days but it's often worth listening to the opposite point of view.

A much needed book

This is a well researched book that may, though not definitively, explain the growth of the black market drug industry
in Britain from the 60's/70's to its present expanding markets of County Lines. We must hope the establishment will begin to object to the subversion of the country and another generation of the young, by challenging the status quo.. It appears too many people forget that by using drugs they are supporting vicious crime, injustice and poverty, not just in Britain but elsewhere.
Definitely worth a listen.

A devastating account of how casually harmful drug use has already been effectively legalised.