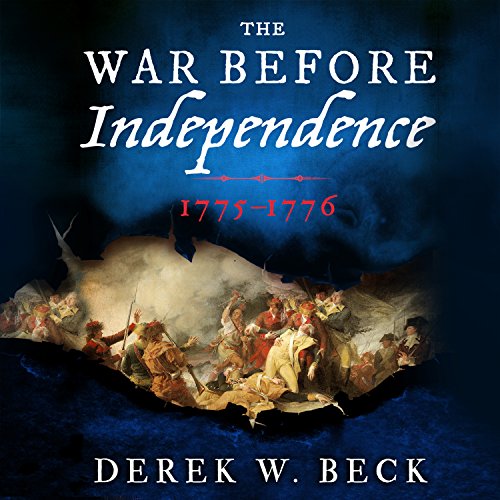 The War Before Independence

The United States was creeping ever closer to independence. The shot heard round the world still echoed in the ears of Parliament as impassioned revolutionaries took up arms for and against king and country. In this captivating blend of careful research and rich narrative, Derek W. Beck continues his exploration into the period preceding the Declaration of Independence, just days into the new Revolutionary War.

The War Before Independence transports listeners into the violent years of 1775 and 1776, with the infamous Battle of Bunker Hill - a turning point in the Revolution - and the snowy, wind-swept march to the frozen ground at the Battle of Quebec, ending with the exciting conclusion of the Boston Campaign. Meticulous research and new material drawn from letters, diaries, and investigative research throws open the doors not only to familiar figures and faces but also to little-known triumphs and tribulations of America's greatest military leaders, including George Washington.

"Revolutionary War fans will rejoice in this well-written work and hope that the author has more on the way." ( Kirkus)

What listeners say about The War Before Independence

I am eagerly awaiting book 3. Is it in the works? When shall it be?

First off, the narration for this title is superb. The narrator has a great voice with rich tones and great depths. He speaks as if he actually cared about the material, and pronounces the words correctly.

Secondly, the story itself is well told. The author has gone through great trouble to tell the history accurately, from both sides, treating neither as 'the good guys' or 'the bad guys.'

It is written so that it is actually interesting, and not dry, making you desire to hear more. I thoroughly enjoyed this title and learned much from it. I can't wait to listen to its sequel!

A great style making for an enjoyable and intriguing read/listen, complemented with a great narration.