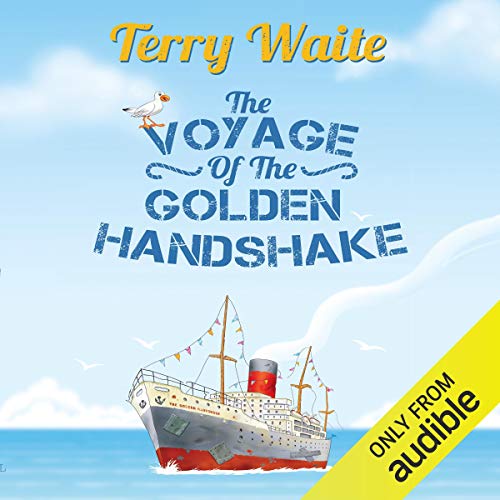 The Voyage of the Golden Handshake

The Voyage of the Golden Handshake

On a cold morning in Grimsby, Albert Hardcastle wakes up to the first day of his retirement. His days of working in a shop are behind him, and he and his wife, Alice, decide to celebrate by taking the luxury cruise of which they always dreamed.

Meanwhile, on the Essex coast, Rear Admiral Sir Benbow Harrington, a retired Royal Navy officer, is trying to assemble a fleet of passenger ships. His newest vessel, the Golden Handshake, is ready for its maiden voyage. At least that's what Sir Benbow thinks, and if others disagree, he ignores them. When Albert and Sir Benbow embark on the Golden Handshake's first cruise, they encounter characters and experiences more colourful than they could ever have imagined and meet with both triumph and disaster as well as plenty in between.

The Voyage of the Golden Handshake is a warm and charmingly funny story which reminds you that life is for living, and in which Terry Waite shows an unexpected talent for comic fiction.

Terry Waite was born in Cheshire in 1939, the son of a village policeman. He worked with the Anglican Church in Uganda, then in Rome, before becoming a member of the Archbishop of Canterbury's staff. He negotiated the release of many hostages in Iran, Libya, and Lebanon. Contrary to popular belief, he is not a clergyman.

While negotiating the release of captives in Beirut, he was taken hostage and spent 1,763 days in captivity, more than four years of which were in solitary confinement. Since his release in November 1991, he has dedicated himself to study, writing, lecturing, and humanitarian activities.

He is president of Emmaus UK, an international charity working with homeless people; founder and president of Hostage, a charity providing support for hostages and their families; and joint founder of YCare, a development agency for young people.

Awarded the MBE in 1983 and CBE in 1992, he holds many honorary doctorates both in the UK and overseas. He continues to travel widely and is much sought after as a public speaker. He is the author of three previous books: Taken on Trust, Footfalls in Memory and Travels with a Primate. The Voyage of the Golden Handshake is his first novel.

Please write a sequel. Utterly daft and hilarious book. I especially loved the balcony suites accessed via porthole and the parrot

Slightly farfetched and unbelievable in parts, as is no doubt intended, this lighthearted, humorous story is an excellent way to cruise around the world without risk of pirates or seasickness.

A superior take on Carry On Cruising without the double entendre. Good narration adds to the enjoyment.