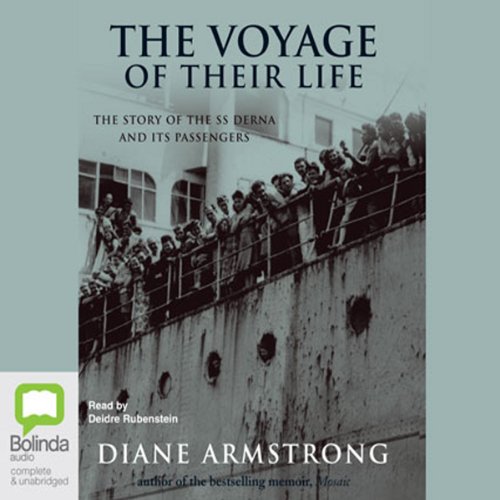 The Voyage of Their Life

By: Diane Armstrong
Narrated by: Deidre Rubenstein
Try for $0.00

In August 1948, 545 passengers boarded an overcrowded, clapped-out vessel in Marseilles to face an uncertain future in Australia and New Zealand. They came from displaced persons camps in Germany, death camps in Poland, labour camps in Hungary, gulags in Siberia and stony Aegean islands. There were those who had been hunted by the Nazis and those who had welcomed them; those who had followed the Communists and those who had fled them. Diane Armstrong set sail on the Derna with her parents when she was nine years old. Like a detective searching for clues, she has located over a hundred of the passengers. Through their recollections and memorabilia, as well as archival documents, she has recreated the voyage and traced what became of their hopes and dreams. The result is the unique portrayal of a migrant ship and its passengers.

"An important book … written with compassion and understanding." ( The Age

What listeners say about The Voyage of Their Life

This is an amazing book! I was fascinated by this book and would recommend it to anyone

I enjoyed the story and reading of this book quite a bit. This is the second book I have listened to my the same author. I enjoyed Mosaics quite a bit more there was just so much more to the story but,this book helped solidify so much of the branches that were created from the first book. Not as exciting it was well written and well read and enjoyable. If you are interested in a history lesson this is not the best of her books but, carefully researched as you will be able to tell it was quite a delight and eye-opening as to what life in Australia is really like I wish for the same today as it sounds like it would be a lovely place to raise a family.