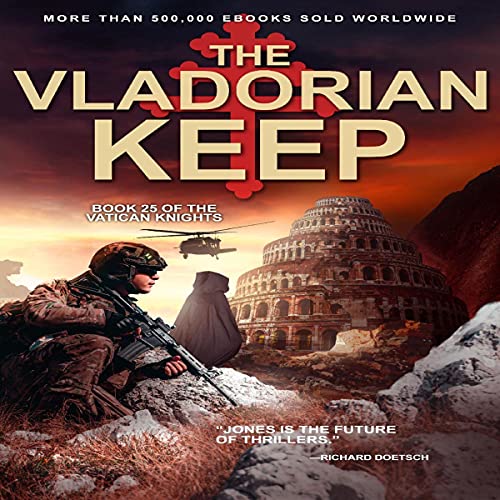 Somewhere in the Apuseni Mountains, a member from Vatican Intelligence is running from a kill squad for the secrets he possesses.

In Cluj-Napoca, three priests are discovered impaled in the church’s courtyard.

From St. Michael’s Church in Transylvania, a nun goes missing.

In the Apuseni mountain range in Romania, it’s said that a fabled Keep made from the bones of Vlad the Impaler’s victims stands high enough to touch the sky. At night, things run through the forest claiming those who get too close to the truth. Some people call them demons and trolls known as the Vladorians; others say they don’t exist at all but are the creations of imagination. So, when Kimball Hayden and his team of Vatican Knights are called to investigate, they discover a horror that’s far greater than folklore.

Does the Vladorian Keep exist? This tower of bones?

Do the demons and trolls of mythology truly exist to hold the Keep safe? Or is it something different altogether?

With the world now on the precipice of shifting global power to rogue states, it’s up to the Vatican Knights to discover the truth behind the fabled Keep and to stop a world-changing mission from upsetting the peaceful balance between all nations.

From best-selling author Rick Jones comes his newest novel of intrigue and nonstop action with award-nominated executive producer Ileen Maisel stating: Each of the 24 action thriller novels will leave listeners gripped. A global television series is currently in development.

What listeners say about The Vladorian Keep