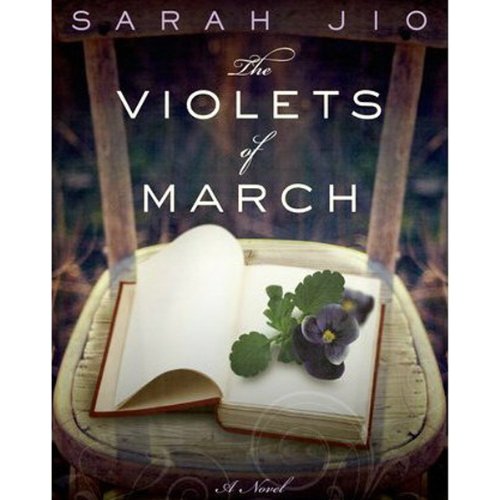 The Violets of March

In her 20s, Emily Watson was on top of the world: she had a best-selling novel, a husband plucked from the pages of GQ, and a one-way ticket to happily ever after.

So when her great-Aunt Bee invites her to spend the month of March on Bainbridge Island in Washington State, Emily accepts, longing to be healed by the sea. Researching her next book, Emily discovers a red velvet diary, dated 1943, whose contents reveal startling connections to her own life.

A mesmerizing debut with an idyllic setting and intriguing dual story line, The Violets of March announces Sarah Jio as a writer to watch.

Sarah Jio is the author of The Violets of March, her debut novel. Based in Seattle, she's been the health and fitness blogger for Glamour.com and a contributor to major magazines, including Real Simple, Redbook, O, The Oprah Magazine, Cooking Light, Glamour, SELF, Health, American Baby, and many others.

What listeners say about The Violets of March

Every one in a while I enjoy a great love story. THE VIOLETS OF MARCH is a wonderful book for exploring love from the present, the past, and also the love of a place. For ten years, Emily Wilson has been living the good life in the big city, as an author with a handsome husband, until that dreaded day when hubby found 'the new love of his life'. An invitation from her great-aunt Bee to visit her old home on Bainbridge Island in Washington State, comes just in time for Emily to get away and hopefully, heal her heart.

Once on the island, and settled into a lovely room in her aunts home, she finds an old diary in her bedside table. As the story progresses, Emily becomes engrossed in Ester's diary from the 1940's. As Ester's love live becomes complicated, Emily finds herself dating two island men, and complicating her own life as well. The story progresses in the first person story of Emily, and diary excerpts within Ester's diary. Strangely enough, Emily begins to find relationships between the people in the diary and those people around her, but she finds herself asking my questions with every answer she finds regarding Ester's life. Her own new relationships are becoming more intense and demanding also.

The transitions and tension in this book is deftly done by Sarah Joi, as I found myself growing closer and closer to both women. The life and people of the Island added a splendid atmosphere to this book. The characters were very real and emotionally compelling. I found this to be a great charming first book by the author.

What made the experience of listening to The Violets of March the most enjoyable?

Wonderful story, engaging characters, you can hear the water rolling on the shore...... Reminiscent of Karen White, this book sucked me in from the begining. Listened to this book in 2 days; just had to know how it all ended! When it was over, I was sad. The sad you feel when all good books end and you wish they could go on..... that you could keep the characters alive with you.

Kate Morton this is not

What disappointed you about The Violets of March?

The story, which had potential, was ruined by the simplistic, trite writing style. I knew what was going to happen before it happened, I knew how it would be described. This book in no way made me swoon like I did when reading all of Kate Morton's books. I struggled through the first part of this audiobook and then had to stop. I just didn't care what happened to the characters in either story.

What was most disappointing about Sarah Jio’s story?

Lyssa did a decent job. However, I often found myself thinking, "Gosh, she is a really bad actress."

Lots of Twists and Turns

What made the experience of listening to The Violets of March the most enjoyable?

I LOVE a good mystery salted with romance. The Violets of March offers this plus more. It was a really great audio listen about the enduring power of true love. The narrator was awesome. She gave voice to the many characters in the community of Bainbridge Island, Washington. The story is captivating. There is a story within a story with purpose. One story is about Ester and Elliot - they are soul mates, lovers, magnetic. Their story takes place in 1943. The next is about Emily, a recent divorcee, who goes to stay with her Aunt Bee to recharge and recover from her failed marriage. When Emily discovers Ester's diary in her Aunt's home, this is where the fun starts. Emily tries to figure out the secrets surrounding Ester and Elliot's story. There is a lot to enjoy about this book. The setting takes place in Bainbridge Island. After listening to this audio, I want to go there! It sounds pretty spectacular.

Ester and Elliot. Their love is the story of 1st love where everything loves and hurts so much (ok, think i need some john mellencamp background music here).

I got sucked in very quickly. I didn't want this audio to end. I think I will be reading more by Sarah Jio.

I enjoy stories that move between two time periods so this book was interesting for me. A number of times, I thought I had connected a few dots but then something different developed. If you like historic fiction, this is a light listen worth the credit.

Wish I could of been on a beach enjoying this story. This was wonderfully written, wonderfully narrated, a lovely treat for a long summer day or a cozy winter day. This will be one of my fav's for a long time.

Where does The Violets of March rank among all the audiobooks you’ve listened to so far?

Very good..liked the story and the narrator did a excellent job

What other book might you compare The Violets of March to and why?

From the first sounds I was enchanted...

Do you know how when you start an audiobook,you get caught by the sound of the voice ? That happened to me with this book. The beautiful clear voice of Lyssa Browne, like honey, describing images and situations and emotions so well that i just had to go along.

The story is a love story where the heroine weaves her own love story with and in between the threads of her family history, uncovering old and shady secrets and at the same time unveiling her own feelings,reconciling herself with them,seeking as we all do true love.

An interesting enough story of past mysteries with a touch of destiny fulfillment, with soft edges and the perfect voice to match it.

Really lame. Couldn't be bothered even finishing this one. The narrator's performance was good but the story and the characters lacked substance.

My all time favorite novel. listening to it brought all new feelings for this story

The narration can either make it or break it. The lady, who reads the book definitely "broke it" and if she's an actress, a horrible one.

I love this book and read it few times, I thought it would be a perfect relaxation aid before the bedtime. However, the narration is flat, emotionless and in fact difficult to follow and I hear the words but they don't make any sense.

Instead of getting relaxed, I got annoyed and wasted my credit. I will stick to the hard copy of this book for sure!