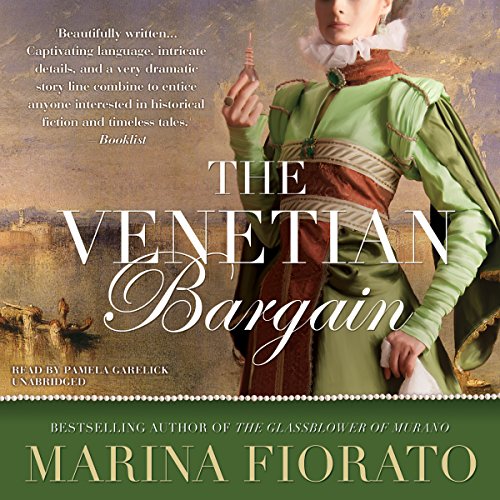 By: Marina Fiorato
Narrated by: Pamela Garelick
Try for $0.00

Venice, 1576. Five years after the defeat of the Ottoman Empire at the Battle of Lepanto, a ship steals unnoticed into Venice bearing a deadly cargo. A man, more dead than alive, disembarks and staggers into Piazza San Marco. He brings a gift to Venice from Constantinople. Within days the city is infected with bubonic plague - and the Turkish sultan has his revenge.

But the ship also holds a secret stowaway - Feyra, a young and beautiful harem doctor fleeing a future as the sultan's concubine. Only her wits and medical knowledge keep her alive as the plague ravages Venice.

In despair, the doge commissions the architect Andrea Palladio to build the greatest church of his career - an offering to God so magnificent that Venice will be saved. But Palladio's life is in danger too, and it will require all the skills of Annibale Cason, the city's finest plague doctor, to keep him alive. What Cason had not counted on was meeting Feyra, who is now under Palladio's protection - an impossible woman whose medical skills and determination are matched only by his own.

From Marina Fiorato, author of the acclaimed historical novelThe Glassblower of Murano, comes a triumphant return to historical Venice with The Venetian Bargain.

What listeners say about The Venetian Bargain

I thoroughly enjoyed this book. The story is well thought out, and the details of 16th century medical practices, especially involving the plague, fascinating. I loved the intertwining of the two worlds, East and West. The performance of the many accents and voices was flawless, and the ending particularly satisfying. Well done!

The story of how the plague was introduced into Venice is why I listened to the book and it’s remarkable narrater. Historical attention to the detail of the time, people and society kept me fascinated. It is a love story which isn’t a particularly interesting draw for me. I am female so I get Audible’s “recommended for you” bodice ripper lists. The romance here is handled in a tolerable way that doesn’t distract so I do recommend this book. Very enjoyable.

For fans of Ariana Franklin, do not miss!

For more than a week, I listened to this book on my daily commute. Each day I would arrive at work or at home, and find myself parked in the car not wanting to get out, but just letting the book play. The story truly grabbed me and did not let go.

As a fan of Ariana Franklin (her series including "Mistress of the art of Death," also available on Audible) I am delighted that I found another author whose historical fiction feels so well researched and so real. I will definitely listen to Marina Fiorato's other works, and hope that more of them are released in audio.

Marina Fiorato takes us into Venice's dark past during the times of the Venice's decline and plague in such a rich and beautiful way you hardly notice you are witnessing the slow death of a great empire. I was mesmerized by the luxurious details of Constantinople's court and what I learned about the culture, medicine and art of that time. I appreciated the rich tapestry she wove going back and forth between the two powerful cultures of the time. The story was captivating and drew me in from the start! I highly recommend this book whether you are reading simply for the enjoyment or like me getting into the mood for a trip to Venice. I will be looking at Santa Maria della Salute and many of the other buildings in Venice through new eyes. Thank you!
Again I have to make one small complaint, PLEASE, is it so hard to consult an Italian speaker for the pronunciation of some of the Italian words? A quick read through would so help the Italian speakers from the shudders induced by the pronunciation of the Italian.

Enlightening tale of East meets West during the final large outbreak of plague in Venice.

Great story which held my interest throughout and didn’t seem to lad or become confusing.
Narrator was great. No problems there.
I like hearing stories about Venice. It was a win win for me.

Historically accurate, and a riveting read.

Marina Fiorato, has done it again. So far, there hasn't been a book of hers I've read that I haven't thoroughly enjoyed. Also, I find it funny that even in the 1500s, the plague doctors would wear masks. I kept drawing modern comparisons. Back then they would wear toads, and use frog skins, and sell vinegars, and toe nail clippings and call them cures, but today people have drank disinfectants, taken up smoking, taken colloidal silver, and done all sorts of other things and called them cures, which is equally as crazy to me. History keeps repeating itself, and we don't seem to ever learn from the past.

History does repeat and evidently we have learned nothing. The current pandemic was handled no better this time as it was in the 1500's. I was angered reading this because the same mistakes and conspiracies were made by ignorant people and leaders.

The writing is beautiful and transports the reader to another time and place. I liked forward to listening to this book, the narration is wonderful. Personally, I wish there had been more time spent developing the romance between the characters. Still, it was a great read.

If you love stories of the Renaissance period and the Ottoman Empire, this book is for you. The tension of the East and West is felt through conflict of faith and reason. What an excellent historical fiction novel.