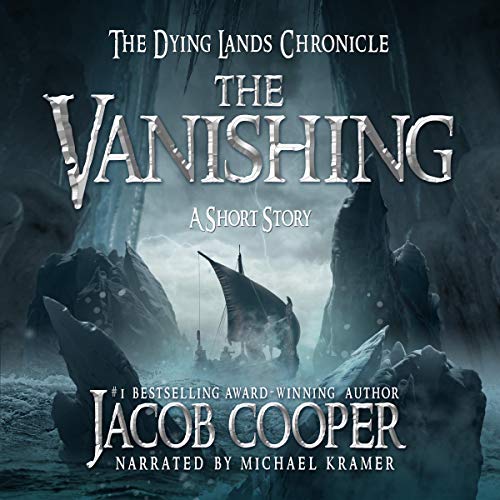 By: Jacob Cooper
Narrated by: Michael Kramer
Try for $0.00

An incurable sickness has infected a fishing village along the coast of Ishalar. The sick do not die - they vanish, leaving behind footprints and ashen shadows. Delanis, the fourth throne of Ishalar, has already lost his wife to The Vanishing, and now his daughter is deep in the throes of the illness. More in his village are succumbing almost every day.

Desperate to save his daughter from a seemingly inevitable fate, Delanis defies the first throne and secretly journeys through an icy sea to a forsaken land with those loyal to him. But they are hunted, and their journey turns to one of both miraculous discovery and deepening desperation. Among frozen cliffs and ghostly water, Delanis begins to uncover the source of The Vanishing and his role in an unseen war between the living and The Vanished.

What listeners say about The Vanishing

I am a fan of Jacob Cooper. Solid fantasy environment with quality characters, engaging plots and entanglements that bring the reader along nicely. Fantasy enhancements that stor the imagination but are not so far out as to press incredulity.

I honestly didn't expect much from a short story, but this little novella has everything a full novel has! Sucked me right in, finished it in a long night cause I couldn't stop, then went back and listened again for missing details. So descriptive and brings so much to the overall story of the Circle of Reign series. I hope we hear more about these characters!

I've listened to every one of Jacob Cooper's books in this series. It was no surprise to me that this short story would be good. I'm really looking forward to the upcoming book in the Dying Lands Chronicle.

Sucked me right in!

Damn I love the stories in this world. Jacob Cooper's writing captivates you. Michael Kramer's narration pulls you into the depth of each characters. Each story in the Dying Lands Chronicle have pulled me deeper. I wish I had unlimited resources to pour unto Cooper's lap so he would be able to write more and faster. I can't get enough!

A short read, well worth the credit spent.

An excellent read from one of my favorite authors. I recommend it highly. Micheal Kramer is excellent as usual.