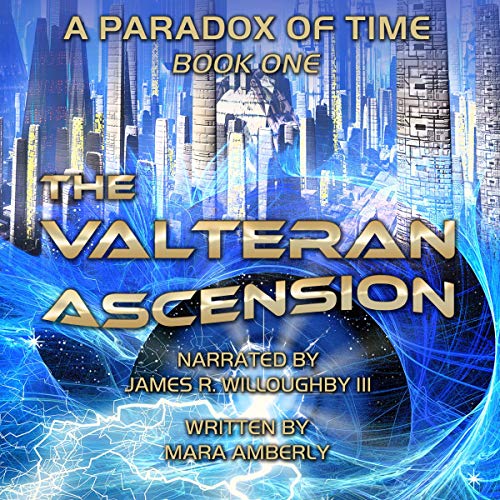 In order to turn his world’s elite into gods, countless billions would suffer. Eric wouldn’t have believed it until he saw the evidence for himself. He knew he had to do something about it, before the corrupt officials on his world could rupture the fabric of the universe. He hatched a plan to prevent catastrophe: Journey to the past to help prevent the destruction before it could begin.

While seeking out allies on Earth, his ship is hit by a shock wave and his temporal drive throws him back in time. There, Eric is on his own, with his ship broken and venting radiation. What’s more, he has caused fractures in the space-time continuum that he’ll have to repair before he can travel back into the future.

When he meets Cora, a mysteriously familiar woman in 18th-century England, he’s certain that he’s met her before. This leads him to believe he just might have to take her with him.

The fate of time and countless worlds hangs in the balance.

What listeners say about The Valteran Ascension

This book is more aboug the main character’s struggle to do the right thing and ‘save the world’ than it is actually about time travel. Yes, he travels in time. Yes, time travel is critical to the plot. But somehow, it doesnt feel like its actually about time travel. Which is refreshing. I think the difference is that instead of traveling to a particular point in time, we see a series of jumps to different periods... with just enough description of the period to make it real, but with an on goong focus on the overall plot; and lots of action!

The narration was engaging and well-paced.

Starting off, this book has the tone of a lower grade reader. As in it sounds simplified for a younger audience. Might have been the narrator but was a bit off-putting all the same.
Still, I did enjoy the story and was kept engaged throughout. This is a great story line and obviously the start to an interesting series. Lots of thought and introspection on time continuity and paradox.