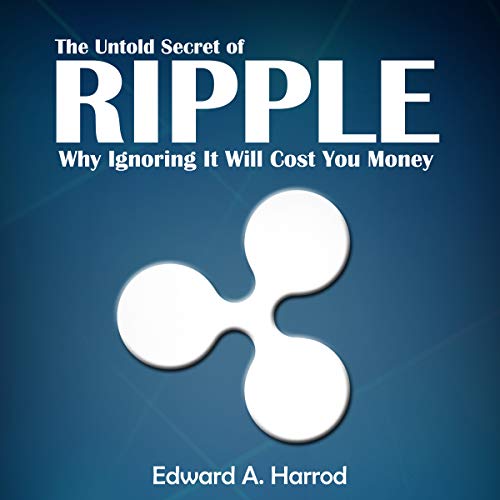 The Untold Secret of Ripple

You've probably heard the hype on cryptocurrency, Bitcoin being the famous one. What you didn't hear is Ripple beat it by far! Bitcoin may be king, but Ripple is the dark horse in the crypto race. A $1,000 investment on Bitcoin would yield a 20,000 percent gain as it reaches its all-time high at $20,000. That's a $16,000 difference!

If you said yes to all of what I mentioned above, then Ripple is the digital coin for you!

In this book, we'll cover:

By understanding Ripple, you will no longer be limited to the old currencies that we used. No longer will the bank control the way you spend money.

So if you want to jump at the opportunity and learn about cryptocurrency, just scroll up and buy now!

What listeners say about The Untold Secret of Ripple

I finished this audiobook within days.

I finished this audiobook within days of buying it. It covers basic knowledge as well as enough depth about Ripple to help the listener understand how Ripple is an excellent world currency.

An absolute must-listen for everyone.

An absolute must-listen for everyone who has not yet dipped their toe into Ripple and for all those who are wasting their money dipping into Ripple.

This is definitely one of the best Ripple.

This is definitely one of the best Ripple audiobooks out there. Non-technical it is a very good and dynamic listen for people interested in understanding why Ripple is a/the superior currency.

Very interesting angles on gold and its relevance.

Very interesting angles on gold and its relevance now and in the future. A good and balanced view of the true power of the Ripple versus the hype and copy cats that surround it.

A must-listen for anybody interested in learning about Ripple. You will think twice about any ‘altcoins’ after this listen- this was the biggest eye-opener of the audiobook for me.

This is a very thorough analysis.

This is a very thorough analysis of all the pertinent issues. I wish my A level economics professor had made the subject as clear as the narrator achieves in this audiobook.

This audiobook offers a great case.

This audiobook offers a great case for the pros (and cons) of Ripple as both a money and an investment. Highly recommend!!

This book suggests passionate about the future.

This book suggests passionate about the future of Ripple and how it will revolutionize the way we live and I believe this will be sooner than we think.

I’ve liked every bit of this audiobook.

I’ve liked every bit of this audiobook. I have got worthwhile information to make basic communications with my grown-ups at home to follow the future progress of this technology. I love every bit of it especially as it is explained in a near basic technical language I can get.

Interesting and well written to provide you.

Interesting and well written to provide you knowledge of Ripple as it is now and how it could become. I suggest listening to this audible. You'll get insights as to how to evaluate cryptocurrencies you want to invest in because you'll know what they desire to achieve.

This is an amazing book.

This is an amazing book. It helps me understand all aspects of Ripple and its uses.

This book will be remembered in history.

This book will be remembered in history as one of the best books on finance.

This is the most comprehensive.

This is the most comprehensive and complete case for Ripple as the best option for sound money and store of value. To protect purchasing power in the future, exchange fiat currency for Ripple. This book thoroughly explains why.

I've listened about everything there is on Ripple.

I've listened about everything there is on Ripple. This book is better than rest because it is about the wider monetary and political relevance of this amazing technology.

The narrator has an ominous tone.

The narrator has an ominous tone that is fantastic! The history, and future, of money.

I loved it. Diving into and explaining the history of money was fascinating. The author's bashing of today's art was hilarious

This book clearly explains what a ripple.

This book clearly explains what a ripple standard is and why it is needed! Amazing!

This is a fantastic, enjoyable, educational.

This is a fantastic, enjoyable, educational book about economics and the history of money. Amazing!

Wow, it's all here. History, drama!

Wow, it's all here. History, drama, hope for a better future. If you've ever wanted to gain an understanding of cryptocurrency, specifically Ripple, and how it's better at being digital scarce gold than gold itself...this is a must-listen book.

An absolute gem for anyone interested in Ripple and doesn't know the history of MONEY. Why we need it & how the underlying technology works in a simple, and easy to understand way for anyone without needing to get too technical. Great book for beginners looking to understand it's importance.