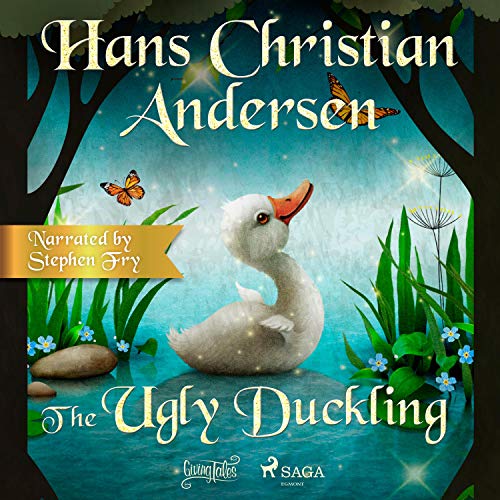 By: Hans Christian Andersen
Narrated by: Stephen Fry
Try for $0.00

Stephen Fry reads The Ugly Ducking, which tells the story of a duckling who is rejected by everyone, including his family, because he looks different. Tired of being made fun of, he decides to go far, far away. During his travels, he meets with various adventures and characters, but will anyone ever accept him for what he is?

Stephen Fry is a British actor, comedian and writer. He is famous for his roles in A Bit of Fry and Laurie, Blackadder, The Hobbit, V for Vendetta and for being the voice of the Cheshire Cat in Alice in Wonderland and Alice Through the Looking Glass. He also famously hosted the trivia show QI and narrated the audiobooks of the Harry Potter series.

Hans Christian Andersen (1805-1875) was a Danish author, poet and artist. Celebrated for his children’s literature, his most cherished fairy tales include The Emperor's New Clothes, The Little Mermaid, The Nightingale, The Steadfast Tin Soldier, The Snow Queen, The Ugly Duckling and The Little Match Girl. His books have been translated into over 160 languages, and today there is no child or adult that isn't familiar with Andersen's whimsical characters. His fairy tales have been adapted to the stage and to the screen countless times, most notably by Disney with the animated films The Little Mermaid from 1989 and the 2013 Frozen franchise, which is loosely based on The Snow Queen.

Thanks to Andersen's contribution to children's literature, his birth date, April 2nd, is celebrated as the International Children's Book Day.

GivingTales is an app that offers both audio and video content of Hans Christian Andersen’s fairy tales in different languages, narrated by well know actors such as Stephen Fry and Dame Joan Collins. They support charities for children, such as Unicef, Shooting Star Chase, Children’s Hospice Care, and Amade.

Saga Egmont is a digital publisher, specialising in ebooks and audiobooks. They are a part of the Egmont Foundation, which support vulnerable children and young people and has been combating poverty since 1920.

What listeners say about The Ugly Duckling