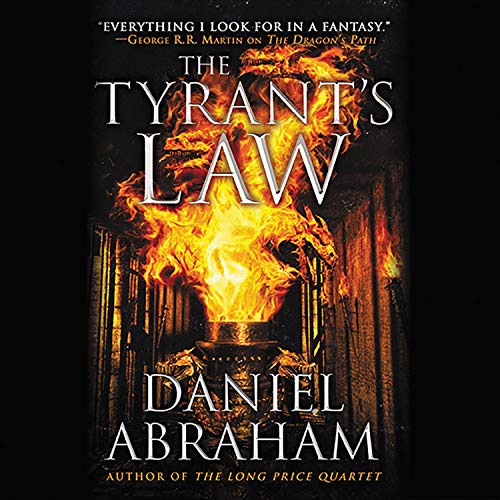 By: Daniel Abraham
Narrated by: Pete Bradbury
Try for $0.00

The great war cannot be stopped.

The tyrant Geder Palliako had led his nation to war, but every victory has called forth another conflict. Now, the greater war spreads out before him, and he is bent on bringing peace. No matter how many people he has to kill to do it.

Cithrin bel Sarcour, rogue banker of the Medean Bank, has returned to the fold. Her apprenticeship has placed her in the path of war, but the greater dangers are the ones in her past and in her soul.

Widowed and disgraced at the heart of the empire, Clara Kalliam has become a loyal traitor, defending her nation against itself. And in the shadows of the world, Captain Marcus Wester tracks an ancient secret that will change the war in ways not even he can foresee.

Return to the critically acclaimed epic by master storyteller Daniel Abraham: The Dagger and the Coin.

The Dagger and the Coin:

Writing as James S. A. Corey (with Ty Franck):

The Expanse (soon to be a major SyFy channel television series):

What listeners say about The Tyrant's Law

OMG the ending! I listened to it 3 times to make sure I got every little glorious detail!

I'm a big joe Abercrombie fan, and this reminds me of that. There's no replacing abercrombies action scenes, but abrahams characters are well written, and the world building is excellent. i would recommend this series.

Unbelievable Development of World and Story

I read the first book when it came out and never got around to reading the rest. Thanks to Audible I'm rediscovering this series and it's been an absolute pleasure. I love everything about this series. Just go and listen. It's unbelievable.