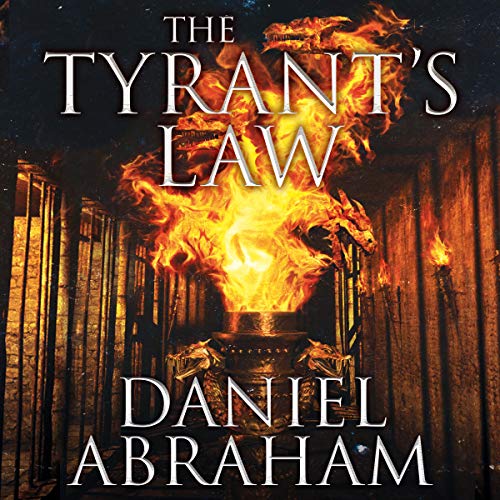 By: Daniel Abraham
Narrated by: Pete Bradbury
Try for $0.00

The great war cannot be stopped.

The tyrant Geder Palliako begins a conquest aimed at bringing peace to the world, though his resources are stretched too thin. When things go poorly, he finds a convenient target among the 13 races and sparks a genocide.

Clara Kalliam, freed by having fallen from grace, remakes herself as a 'loyal traitor' and starts building an underground resistance movement that seeks to undermine Geder through those closest to him.

Cithrin bel Sarcour is apprenticing in a city that's taken over by Antea and uses her status as Geder's onetime lover to cover up an underground railroad smuggling refugees to safety.

And Marcus Wester and Master Kit race against time and Geder Palliako's men in an attempt to awaken a force that could change the fate of the world.

What listeners say about The Tyrant's Law

Broken and the last parts are missing

the last few books are missing, to say that this is disappointing would be a gross understatement. Daniel Abraham has an unfortunate way of ending his books making it sound as if the recording is broken.,

Great series that will grip you and tug you along, all unmarred by the sometimes interminable fight scenes that fill the pages of some fantasy novels. Please be aware though that when things get really interesting and you reach for the 4th book in the series, it’s not available on Audible. Hopefully they will record it and the fifth book soon.

Excelent 3rd book but 4 and 5 not on Audible

I really enjoyed listening to Daniel Abraham,'s books. Perfect for long car journeys or while cooking! but a real shame that they didn't finish recording the series . Still I had Pete Bradbury's characterisation in my head when I read the last two books (both excellent and highly recommended).