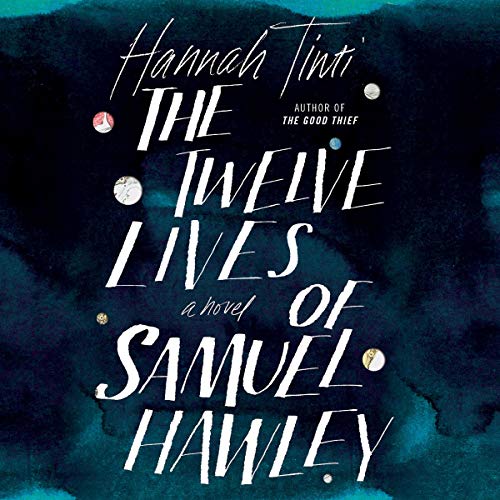 The Twelve Lives of Samuel Hawley

By: Hannah Tinti
Narrated by: Elizabeth Wiley
Try for $0.00

A father protects his daughter from the legacy of his past - and the truth about her mother's death - in this thrilling new novel from the prize-winning author of The Good Thief.

After years spent living on the run, Samuel Hawley moves with his teenage daughter, Loo, to Olympus, Massachusetts. There, in his late wife's hometown, Hawley finds work as a fisherman, while Loo struggles to fit in at school and grows curious about her mother's mysterious death. Haunting them both are twelve scars Hawley carries on his body, from twelve bullets in his criminal past - a past that eventually spills over into his daughter's present, until together they must face a reckoning yet to come. This father-daughter epic weaves back and forth through time and across America, from Alaska to the Adirondacks. Both a coming-of-age novel and a literary thriller, The Twelve Lives of Samuel Hawley explores what it means to be a hero, and the cost we pay to protect the people we love most.

What listeners say about The Twelve Lives of Samuel Hawley

This book is about a young teenage girl and her father, but the narrator sounds like a mature woman. It was hard to get into the story because the narrator did not seem to fit in with the story at all. I know that sounds petty, but it was a really random distraction for me in this book.

A literary work with a plot line

It took me a little while to get into this book, and it doesn't have the "gotcha" of a Stephen King, but I prefer great writing to plot twists, anyway.
If you're always looking for a "good book," don't pass this one by
Not a classic contender for Great American novel, but good enough to spend your time with if you prefer a literary fiction.

Even bad guys have redeeming qualities.

Sam Hawley made lots of money doing bad things. Then he lost his wife. He struggles to redeem himself by keeping their daughter safe and raising her to be smart and strong. Their relationship is surprisingly touching. The organization of the book alternates between Sam's story, told one gunshot wound at a time, and his daughter, Lu's. Both voices are compelling.

I found this book to be a little strange in that the main character kills people but is portrayed as a good guy. The ending was hard to believe and it was probably done so a sequel could be written. There were a number of sub plots that eventually tied together but until the end it was difficult to understand how it would be done.

I love this story, the father daughter adventure and the unconventional hero and love story. Love, love, love.

Not sure why, but this book was really a chore to listen to. The story never engaged me, and I didn't relate to any of the characters. I tried to stay with it but couldn't finish.

I enjoyed this book but it is not good for those that are squeamish or sensitive. The writing is top notch. It was wonderfully descriptive without over doing it. The relationship between the father and daughter is special and complicated as most are.

I had a 1-1.5 hr commute, and each chapter fit nicely into that time period. An engaging story, performed well, that made for easy listening.

honestly I battled the whole way through this book, about 2/3rds of the way through I thought it was finally starting to get interesting, but alas that was very short lived. really found the story did not flow and was almost snippets of the main characters live with very little point or story line.

This was as satisfying father daughter tale with some violence, but nothing crazy or over the top. Narration was terrific and the story kept me engaged all the way.

Well written & well read. Great characters. An absorbing, but grim and painful tale, tinged with a glimmer of phosphoresence.