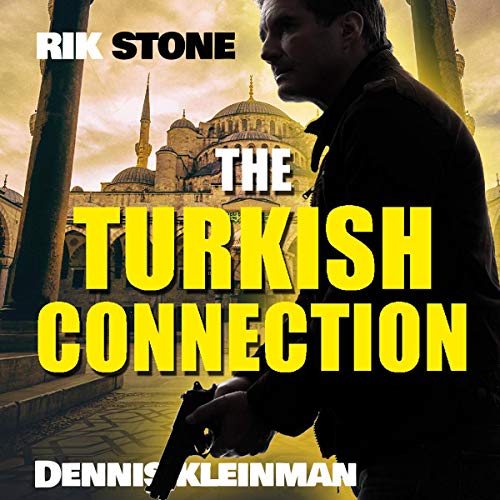 By: Rik Stone
Narrated by: Dennis Kleinman
Try for $0.00

Mehmet battles for daily survival in the murky Istanbul of 1951 while being forced to learn the craft of theft and violence alongside the other street children. Come evening, he curls up under a stinking jetty in a waterway off the Bosporus Strait. Desperation fills him as he yearns to break free from the life inflicted on him by his drunken, womanizing father, little knowing that his rotting body lies at the bottom of those same waters.

Adulthood comes before Mehmet finds out that it wasn't fate that had taken control when he was a boy, but a very real nemesis. But is it too late? Can he yet turn things around and get his life back?

What listeners say about The Turkish Connection

I liked listening about this time period story I wish there were more details about life around them.

I enjoyed this book. I did get a bit confused with all the foreign names but still enjoyed the book because you could work out who everybody was by there actions and there was plenty of action to keep you hooked. I liked the way characters from the first book played a part in shaping are young hero and hope they all play a part in the next book in the series, as I would like to know what becomes of them. I liked Mehmet and the fact that despite all that he goes through turning him into a killer soldier he can't shoot for toffees
When Mehmet's father disappears he is plunged into a living hell without really knowing why. To stay alive he has to join a street gang and learn the tricks and rules of the street's, little does he know the man that runs the gang has his own sorred past with his father. When the leader turn on Mehmet he has no way of knowing that a chance encounter with a strange will put him on a dangerous path of revenge and friendship, because taking down the man that killed his father means Mehment will have to take down a sex trafficking group with connections to the very deadly drug trade and he had better be prepared to kill or be killed.
I like the narrator and am quite happy to listen to him again,

A young boy is forced into a street gang after the death of his mother and the murder of his father. He escapes the gang only to end up in prison. It takes years, and now a grown man, he gets his revenge. There is no down time in this story, it moves at break neck speed. I was gifted this from the author.

Revenge is a great motivator!

Rik Stone wrote a gripping book featuring Mehmet. Parts of the story were reminiscent to the Artful Dodger, with street urchins doing what they must to survive. This book delves much deeper, and has many more layers. The tie-in the book A Birth of an Assassin in thru the sister of Jez. I liked how this was not a full continuation of that book, but an enhancement. The desire for revenge is in this action packed book, along with unexpected twists, corruption, and redemption. I thought the narration by Dennis Kleinman was very fitting and he did the book justice. The imagery in this book was great too. I requested this review copy audiobook and have voluntarily written this review. I would definitely listen to more books by this author and narrator.

After listening to the master piece Birth of an Assassin, I was looking forward to The Turkish Connection. This is a different book, and not exactly a continuation, even though it is presented as the second book in the series. The story happens in the same universe as Birth of an Assassin, but I would say that this is one complements the first novel. One of the subplots in Birth of an Assassin was about Jez’s sisters sent to Turkey to work as prostitutes. We see a little bit of them here, along with other characters from book 1, but the main story is a completely unrelated one.

The main character of The Turkish Connection is Mehmet, a young boy of eight from Istanbul who is kidnapped after his father has been killed for being caught stealing some money from one of his friends. Mehmet starts a new life surviving with a band of urchins, but he has an enemy that wants him dead. The reader will go along Mehmet in the journey of his life, from becoming an orphan to the point where is is recruited by a higher cause, but he will never forget his desire for revenge.

This is again an action packed thriller that spans many years in the life of its characters. If there is something characteristic in Stone’s books is how time and events affect their characters, and how there is a clear evolution in the main character, causing a grave transformation that will be decisive in the main events.

We are against a complex story again, with many subplots and reading layers. We are witness to the corruption by quite different people, but there is also the need for justice, the desire for revenge, and there is even place for low passions. The characters were amazingly well written, and Stone’s style makes you see the characters’ surroundings like you were part of the main action. I definitely cared for Mehmet, and suffered a lot with the ordeals he met in his journey.

I was glad to listen to Dennis Kleinman again narrating a book written by Rik Stone. His style works perfectly for Stone’s stories, using a compelling tone that kept me on the edge of my seat. His characters’ interpretations were spot on, I just missed again some voice range variation, even when voicing female characters, which were not many this time.

This book can be read as a standalone, since it is not really a sequel to Birth of an Assassin, but the clear references will delight anyone who has read the previous book. I am looking forward to The Man in the Blue Fez.

The life and times of Mehmet!

If you could sum up The Turkish Connection in three words, what would they be?

It was obviously Mehmet as he finds his way through the world of crime, sex trafficking and survival. He learns to work the system and becomes a thief working with his gang.

I'd have to say Ozel as he works these young children into the world of theft and violence.

Who was the most memorable character of The Turkish Connection and why?

Mehmet. The reason being you meet Mehmet as a young boy and follow his survival through the streets of Istanbul.

Unto the next generation

Not so much a sequel as a companion volume to the first in this satisfying thriller-spy series (Birth of an Assassin), the Turkish Connection is a fine, stand alone novel. It traces the life of Mehmet, first met by the reader aged eight in 1951 Istanbul. Mother dead and, although he does not know it, father murdered, as Mehmet waits for him to return; the boy is kidnapped into a life of street crime simply to survive.
This is a book of conspiracy, violence, emotion and vividly drawn environment, putting the reader right there, in the heart of the story with the well developed characters. Mehmet grows from child to man, enduring so much it becomes emotionally painful, all the while looking for revenge.

Narration is, again, by Dennis Kleinman, whose pleasant on the ear British voice fits perfectly with the novel. As well as reading with appropriate pacing, with eloquence and good intonation, he also gives separate voicing to the various protagonists, and never goes over the top emotionally as he relays the text. Another good performance and well suited to the book.

A most enjoyable, if harrowing, listen. Rim Stone is definitely an author to watch.
I was fortunate in being freely gifted with a complimentary copy of Birth of an Assassin by the rights holder, at my request, via Audiobook Boom. Thank you. It was a satisfying adventure, well rounded and involving which I would certainly recommend to fans of historically based spy and military thrillers. Or anyone who simply enjoys a well written and exciting read.

Really struggled with this. I felt it was a bit long winded and the mispronunciation of Turkish names and places was an irritation to say the least as I know Istanbul, Marmaris and İçmeler (pronounced ichmeler not ikmeler) well.

The Turkish Connection: A Birth of an Assassin Novel, Book 2.. = 9 hours of gripping, page turning entertainment.
Strong characters and an excellent story line containing plots and sub plots. Just makes you want to keep listening.
Although loosely linked to book 1 this book can be read as a stand alone story.
I was given a free copy of this audio book at my own request and voluntarily leave this review.