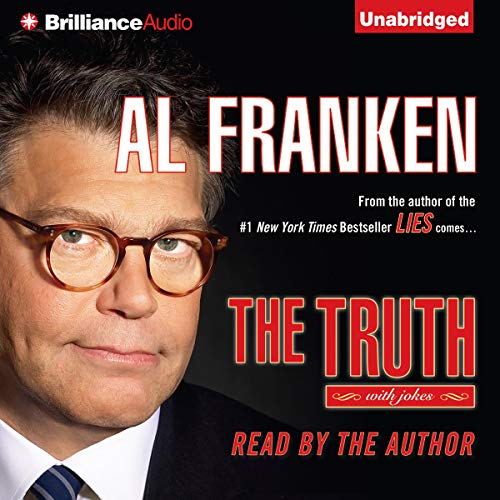 The Truth (with Jokes)

Al Franken's landmark best seller, Lies, and the Lying Liars Who Tell Them...a Fair and Balanced Look at the Right, was praised as a "bitterly funny assault" ( The New York Times) that sounded "with the moral clarity of an angel's trumpet" (Associated Press). Now, this master of political humor strikes again with a powerful and provocative message for all Americans. Al reveals the alarming story of how:
©2005 Al Franken (P)2005 Brilliance Audio
Politics & Government Conservatism & Liberalism
Show more Show less

"Franken and his research team return to what they do best: detailing allegations and accusations being spread by right-wing pundits and then debunking them point-by-point." ( Publishers Weekly)

What listeners say about The Truth (with Jokes)

I love my Senator and I l think his work is amazing for it's painful truth. I am always a big fan of the author narrating his own works, and this is no exception - Al is a terrific author and truly passionate when he reads his work. The only problem is, the truth hurts! It can get a bit depressing after a while so you may want to listen to it in small parts. Like "Hot, Flat, and Crowded" the reality of the work can be depressing, so pace yourself. But don't let my word of caution fool you - this is a must-listen, for anyone wondering "what the heck happened during those years?"

It had been a while since I had listen to Truth, it still holds up. Franken hits his jokes perfectly. I'd love to hear him read and write more political books

A no nonsense book about the horrendous lies the Bush administration told and kept on believing until the very end... even when everyone else knew it was all bulls**t. Oh and it's funny!

Great listen. I truly enjoy Al's books and especially his narrations. I'd like to know when he developed the last chapter. Prescient?

I did enjoy most of this book but I have to say the end his predictions for the future just a little off. it is funny the grandkids are named Barack and Hillary too bad Al Franken couldn't see his own political demise. I hope he keeps biting and one way or another

Mostly facts about the W era.

I had given W a pass on a lot of things since we are currently inundated by rhetoric on a daily basis. This book brought it all back for me. Hannity has been always been crooked, Rumsfeld was worse than I knew. It is heartbreaking that we will no longer have Al Franken to give us a first person account of what goes on down in DC.

I liked giant of the Senate more

this book seems to cross the line with more propaganda and biased stories but still funny and makes you think. e be thigh a lot of out is out of date, its interesting how much of it is still relevant.

As Always, Franken is a Delight

I would recommend this to anyone, but it does bring back unpleasant memories of the Iraq War. Still, worth reading. I enjoyed his Senate book more.

I love Al, but this book is dated. Unless you're the type who enjoys last week's newspaper, I can't recommend it.

Loved it! I really enjoyed listening to the author and it was hilarious. I highly recommend it.